Lions, Tigers And Bears Escape From Ohio Animal Preserve…And Are Still On The Loose 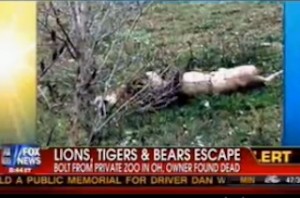 The worst case scenario appears to be at hand at an Ohio-based wild animal sanctuary. According to numerous reports, a number of wild animals have escaped a preserve located in Zanesville, which is roughly 55 miles east of Columbus. According to an AP report, local authorities have said that “bears and wolves were among the escaped animals that were killed and there were multiple sightings of exotic animals along a nearby highway.”

Schools closed and motorists were warned to stay in their vehicles as officers with assault rifles patrolled a rural area in eastern Ohio Wednesday, a day after police killed dozens of escaped animals from a wild-animal preserve, where the owner was found dead.

When asked on NBC’s “Today” show whether Muskingum County Animal Farm owner Terry Thompson may have killed himself, county Sheriff Matt Lutz responded, “Anything’s a possibility at this point.” He said authorities were awaiting autopsy results. Lutz had said earlier that the death was not suspicious.

As authorities warned that more animals still were on the loose, three school districts in the region and some private and special schools canceled classes as the remaining bears, big cats and other beasts from the Muskingum County Animal Farm were hunted down.

Reports also claim that close to 38 of 50 animals have already been shot and killed already, though it appears that there are still exotic and dangerous animals still on the loose. Watch a report on this story on Fox and Friends, courtesy of Fox News: