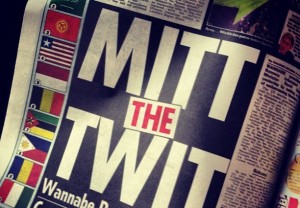 Republican presidential candidate Mitt Romney‘s 3-nation world tour got off to a bumpy start this week, as the candidate ruffled more feathers in Great Britain than a wood chipper on a poultry farm. Romney’s gaffes set the British press on him, which in turn translated into deadly headlines at home, but not only could this have been worse for Romney, this instant dogpile could actually end up helping him.

At the beginning of the week, the conventional wisdom was that Romney’s trip abroad would be a low-risk no-brainer, a chance for the candidate to quietly brush up on his world-leadering. Who could have predicted that Romney would bungle a softball question about the London Olympics, and that the British press, along with the Prime Minister and the Mayor of London, would let him have it the way they did?

Romney turned Great Britain into ire-land when he told NBC News’ Brian Williams, when asked if the Olympic host city was ready for the games, that there were “a few things that were disconcerting,” and wondered if “the people of the country” would “come together and celebrate the Olympic moment?”

The American political media, particularly progressive media types, sank their teeth into the mouth-watering controversy with gusto, lustily reporting British tabloid headlines about “Mitt the Twit” and the “charm offensive” that was “devoid of charm, and mildly offensive.” They even called Romney a “wazzock,” which probably isn’t even a real word.

Romney’s Olympics gaffe was compounded by another misstep, wherein he publicly disclosed that he had met with the head of MI-6, which is apparently supposed to be a secret (at least he didn’t brag about meeting the head of M-16).

It was almost enough to make a bleeding-heart liberal feel bad for Romney, except for the fact that his campaign prefaced the trip by leaking remarks to the British press about Romney’s appreciation, and President Obama‘s lack of same, for our nations’ shared “Anglo-Saxon heritage,” which is kinda racist, and said that Romney “feels that the special relationship is special,” which is just stupid. This just in: Romney also feels that hot chocolate is hot. And chocolaty.

As much fun as it is for liberals to watch a guy who just got done bumblebragging about the “special relationship” throw cold water all over it, Romney’s gaffes in London are the rare kind that actually should matter. Already greener on foreign policy than the back of a thousand-dollar bill, creating an international incident over the Olympics (a supposed Romney strength) doesn’t inspire confidence. It’d be like Orville Redenbacher burning the Queen’s popcorn.

Outside of the political class, however, Romney’s gaffe doesn’t figure to hurt him all that much. While Americans have a positive attitude toward the UK, there’s also a bit of a cultural rivalry, so British apoplexy over Romney’s essentially true statement is likely to inspire “We’ll use whatever fork we want to!” apathy among the general public. The one thing that might sting is British Prime Minister David Cameron‘s dressing-down of Romney’s Salt Lake City Olympic experience as taking place “in the middle of nowhere.”

On the bright side, the gaffes that upset the British so much took all the air out of another portion of that Brian Williams interview that actually could have hurt Romney with stateside voters. Asked about prospective First Lady Ann Romney’s Olympic horse Rafalca, Romney distances himself from it like a bag of booger-wrapped cooties:

It was like watching the world’s worst Password player. I kept expecting Bert Convy to come out and yell, “It’s a French-soundong word for horse-dancing! It’s how Pauly Shore might describe an array of women’s clothing!”

What kind of guy throws his wife’s horse under the bus because he doesn’t want people to make fun of him for saying “dressage?”

But the real benefit to Mitt Romney, all kidding and snarking aside, is that the outsize glare from this week’s gaffes will completely reset expectations for the remainder of his trip, while also serving as a warning to Romney and company to button it up, way up. If Romney can manage to avoid stepping on any rakes in Israel and Poland, where such gaffery could really hurt him, the trip will be characterized in the press as “finishing strong,” and if Romney has an ounce of sense, he’ll keep his trap shut for a few days, smile for the pictures, and leave any and all references to screwing in light bulbs out of his speech.