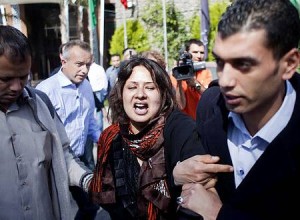 You might remember Iman al-Obeidi (her name has also been spelled as “Eman” and “al-Obiedy”) – she’s the Libyan woman who burst into a hotel full of journalists in order to report her rape and attack at the hands of pro-Gadaffi forces. She was eventually taken by those very same forces.

In the days following her attack, al-Obeidi’s mother, Aisha Ahmed, told reporters that her daughter was still in custody, despite reports to the contrary coming out of Tripoli.

Now, NPR’s Lourdes Garcia-Navarro and another reporter were able to sneak a visit to al-Obeidi’s home, where she is finally recovering. Al-Obeidi, who has been unable to leave her house in light of a television smear campaign against her, recounted the details of her ordeal.

She was picked up at a checkpoint, apparently because her ID indicated she was from the area where the movement against leader Muammar al-Gaddafi was essentially “born.” She says she and another woman were taken to a house full of drunk men, where she was tied up and alcohol was poured into her eyes. She also received, she says, various kicks to her head, and was scratched multiple times. She recalls that the men would take turns raping her in groups of three over two days. The most aggressive of her attackers, she says, was the son of a government minister.

She was eventually able to convince the other woman, who was also raped repeatedly, to untie her, and she escaped, although her fellow captive was too frightened to join her:

Wrapped only in a tablecloth and bleeding, Obeidi says she tried to make her way out of the compound, but there was a huge wall and an electric gate. She grabbed a piece of metal and ran at the two African guards who were sleeping, screaming hysterically and demanding that the gate be opened.

“The guards were shocked to see a bleeding naked woman with wild hair holding a piece of metal,” she says. “So they opened the gate for me and I just ran out.”

And there, she was helped by people in the neighborhood.

“[The neighbors] put me in a taxi, paid the fare, and I told the taxi driver to take me to the hotel [where the journalists are staying],” she says.

Al-Obeidi’s marks and wounds have yet to completely heal. Rubbing salt in those wounds is the fact that the government, while having finally acknowledged that it “seems as if she was raped” (this after several witnesses backed Al-Obeidi’s account of what happened), has repeatedly accused her as either having a political agenda, or of being a prostitute. Said government spokesman Moussa Ibrahim:

This woman, this is her line of work. She’s well-known for that — she has a file. This is no secret. She claimed that she was kidnapped and raped. This is a legal criminal case. We wondered why she made it look political. I mean, it’s not like the whole Libyan army raped her, is it?

Suffice to say: In Libya, there is still no justice for Iman al-Obeidi. But, if anything, her story at least highlights the manner in which rape may be being used, as some have ventured to guess, as an “instrument of war.”