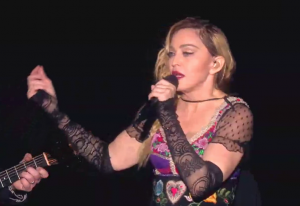 Madonna stopped her Saturday concert in Stockholm, Sweden to pay tribute those who died in the “tragic killings” and “assassinations” in Paris on Friday night, but after crying for the victims and their families, she wrongly told the audience at the Tele2 Arena that while people do “atrocious, degrading and unforgivable things” to one another, among the reasons for these senseless acts of violence is that we don’t treat “every human being with dignity and respect.” Her view of terrorists, namely ISIS, is naive and downright foolish. See Madonna’s speech below.

Madonna started off in the right direction when she paused her performance and said, “I feel torn. Like, why am I up here dancing and having fun when people are crying over the loss of their loved ones,” before adding in tears, “However, that is exactly what these people want to do. They want to shut us up. They want to silence us. And we won’t let them. We will never let them!”

The singer, who’s set to perform in Paris on December 9, then said, “I was going to cancel my show tonight but then I thought to myself, ‘Why should I give that to them? Why should I allow them to stop me and to stop us from enjoying freedom?’” Before veering off course, Madonna rightly continued, “All of the places where people were killed were places where people were having fun. People were enjoying themselves, eating in restaurants, dancing, singing, watching a soccer match. These are freedoms that we take for granted, of course, and we must not but they’re freedoms that we deserve. We work hard and we deserve to have fun, and there is no one in this world that should have the right to stop us from doing what we love.”

But after making a number of valid points, Madonna blew it big time. She first acknowledged, “There are people who have no respect for human life, and there are people that do atrocious, degrading and unforgivable things to other human beings, but we will never ever, ever change this world that we live in if we do not change ourselves, if we do not change the way that we treat one another on a daily basis.” Madonna then misguidedly added, “We must start treating every human being with dignity and respect, and this the only thing that will change the world… Only love will change the world, but it’s very hard to love unconditionally, and it’s very hard to love that which we do not understand or that which is different than we are, but we have to or this will go on and on forever.”

While in broad brushstrokes, there’s no argument that spreading love and treating one another with “dignity and respect” will make for a better planet, but ISIS doesn’t play by those rules. ISIS detests our way of life. ISIS wants to wreak havoc on the Western world.

There was no act of love or kindness nor any show of dignity or respect that could have been done by the government of France or the 129 people who were murdered that would have changed ISIS’s resolve to kill and injure as many innocent people as possible. Perhaps those who are terrorized can learn to “love unconditionally,” but it will never sway the terrorists’ hate.

Following her mostly well-intentioned speech, Madonna then launched into her 1989 hit, “Like A Prayer.” Sadly, though, it will take more than dignity, respect, love or even prayer to stop ISIS.

Watch the video above of Madonna addressing the audience in Sweden.