Major Garrett On Sarah Palin Presidential Plans For 2012: Can She Let Go? 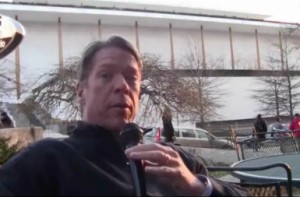 On Monday, I interviewed former Fox News Senior White House correspondent and current National Journal Hill correspondent Major Garrett on a variety of topics. In this segment of our exclusive interview, Major talks about how the 2012 Presidential election will turn, and whether or not he thinks Sarah Palin will run. On that score, Garrett raises an interesting question that I haven’t heard elsewhere.

Major and I met just outside the Rivers at the Watergate restaurant (where they serve some mean Bison Sliders with horseradish mayo), and spoke for about 20 minutes, on several subjects. Although we’ve been colleagues for over two years, this was the first time I’d had the opportunity to interview Major (on-camera, at least). Given the length of the interview, and my travel schedule, I’ve broken it up into 8 parts, to be released as they’re ready.

Early in the interview, I asked Major about the current fight over the budget, and to assess the playing field for the 2012 Presidential election. He avoided the expansive tundra that is the Republican field, instead delivering the Wonk’s Guide to 2012. This is consistent with his status as a longtime DC journalist, where people know that the chess pieces change all the time, but you gotta pay attention to the board:

While the entire Republican field is probably too large and unfocused at this point, I had to ask Major about the 800lb Mama Grizzly in the 2012 room, Sarah Palin. True to form, Major hit on a point that eludes many other Palin-watchers, pro and con: