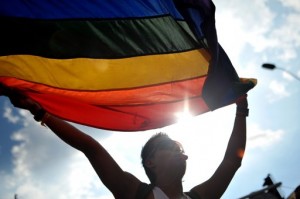 With President Barack Obama‘s endorsement of same-sex marriage, LGBT rights has taken a prominent spot in the news cycle. A new Gallup poll taps into that, finding that majority of Americans say, for the third year in a row, that same-sex relationships are morally acceptable.

According to the poll, 54% accept gay/lesbian relationships — compared to 56% in 2011. While that’s a slight dip, the number had been steadily increasing from 38% in 2002. The trend is in line with the support for legalizing same-sex marriage, which rose from “42% support in 2004 to 50% or greater support in the last two years.”

Americans’ acceptance of gays and lesbians as equal members of society has increased steadily in the past decade to the point that half or more now agree that being gay is morally acceptable, that gay relations ought to be legal, and that gay or lesbian couples should have the right to legally marry. While public support has been trending upward, support on all three measures was slightly higher in 2011 than in the new 2012 poll, suggesting attitudes may be leveling off — at least for the time being. However, they are stabilizing at a point that makes President Obama’s decision to publicly support gay marriage much less controversial than it would have been even four years ago. Significant pockets of resistance remain — namely Republicans, those 55 and older, Protestants, residents of the South, and, in some respects, men — but majorities of other groups have grown comfortable with gay rights.