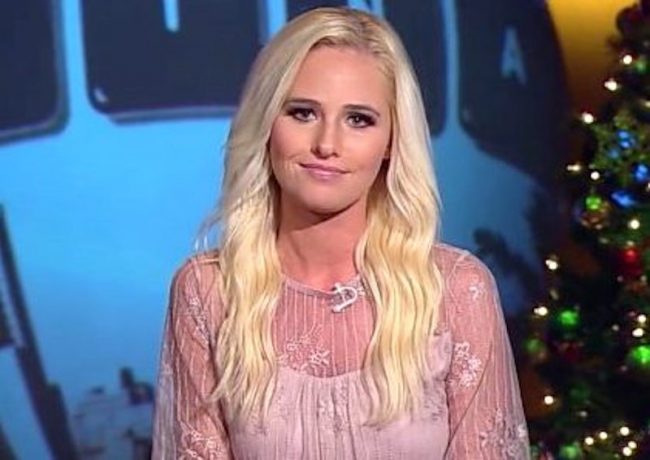 For those media personalities who have decided that sucking up to Donald Trump is a good career move, these are the very best of times. ‘Conservative’ talk radio has been saved (probably only temporarily) by this wholesale sell-out, and Fox News’s ratings, as a result, are as strong as ever.

However, as with any situation where a large group has a strong wind at their back, some have gotten swept up in the desire to please the King and their careers have suffered collateral damage as a result of their proximity to the wake that Hurricane Donald inevitably leaves in his path. For them this has been the worst of times.

For very different reasons — and under vastly differing circumstances — you could put Billy Bush, Milo Yiannopoulos, and (maybe) Judge Andrew Napolitano in this latter category. You can also argue that rising star Tomi Lahren, who has been suspended this week from her Blaze network TV show, belongs in this group as well.

Lahren’s situation is interesting from a number of perspectives. While only 24, she has become incredibly popular, especially online, in a remarkably short span of time. She is seen by many as a hybrid of Megyn Kelly and Ann Coulter, with an excellent chance to be the future of ‘conservative’ media.

The explosion in her popularity has been driven, in my opinion, by three things. Her high-testosterone, take-no-prisoners commentaries; her obvious/overt sex appeal; and her hyper (though belated) support of Donald Trump.

Thanks in large part to these factors, the decision by TheBlaze to suspend her in the aftermath of her appearance on The View, where, suddenly and out of nowhere, she decided to dramatically flip her position on abortion, has become a bit of a seminal moment in what is left of the conservative movement.

Liberals have conveniently spun Lahren’s suspension as some sort of punishment for being “pro-choice,” but that incredibly simplistic analysis makes very little sense to me. After all, presumably she’s going to return next week and still be “pro-choice” (though with her record of changing positions with the breeze, you never know). What would be the point of a suspension when that ‘issue’ is still going to be in existence and, in fact, made far better known to TheBlaze audience by the news coverage of this dramatic action?

The founder of TheBlaze, Glenn Beck, has publicly stated that you can be pro-choice and work for him, which I completely believe. He made it clear via Twitter that his concerns about Lahren were far more about intellectual honesty/consistency than about some sort of rigid ‘conservative’ orthodoxy. He also suggested on the radio that her abortion flip-flop was an example of a much larger problem of what motivates Lahren’s perspectives on issues.

Coincidentally, I have had significant contact with both Beck and Lahren within the last few days. I was in Dallas last Thursday, the day before Lahren’s appearance on The View, to do a series of interviews for both radio and television with Beck and others on the network. I had asked Lahren before I left if I could interview her while in Dallas for my weekly podcast. She said she would do it, but wouldn’t be in town Thursday because she had to travel to New York for The View.

While at the time I was struck that while spending all day at TheBlaze no one ever even mentioned her name, I have no inside information about this situation. In fact, I asked one executive for some sort of official comment on Lahren’s suspension and I got absolutely nothing substantive in response.

However, it would not surprise me if this pro-choice issue is really more the result of a fracturing relationship than its being the root cause of all this. My sense of Lahren, having been interviewed by her once and having watched her since her days on OANN, is that she is mostly a very good actress who is skilled at reading what is best for her career.

Her neck-wrenching flip-flop on abortion — which just happened to be announced on the platform where she would get the most positive reception for it — is only one example. While she was defending herself on Twitter after the resulting backlash, she mocked those attacking her as the same people who thought Trump couldn’t win the presidency. Soon a video emerged of her emphatically declaring during the GOP primaries that “only Marco Rubio” could win the White House for Republicans.

Ironically, I once (apparently incorrectly) viewed Beck in the very same way that I currently see Lahren (only without the sex appeal). However, having gotten to know Beck some within the last year, I am confident in saying that his position of being mostly anti-Trump is actually based purely on principle. It was also done with the full knowledge that he and his network would pay a potentially severe price in lost audience. Given this incredibly jaded media era, he deserves extreme credit for this stance.

After taking such an incredible risk to standup for what he believes in — when almost no one else in the business is doing so — it must gall Beck to see a young person take such a calculated stance on Trump purely for their own personal benefit. Heck, I know it bothers me and I’m just an observer.

My guess is that if this is, indeed, the beginning of the end of Lahren at TheBlaze, her appearance on The View, after seeing the writing on the wall, was her way of building an escape hatch to the mainstream media. Like most good-looking people also born with the opportunism/manipulation gene, things will likely work out just fine for her.

For now.
— —
John Ziegler hosts a weekly podcast focusing on news media issues and is a documentary filmmaker. You can follow him on Twitter at @ZigManFreud or email him at johnz@mediaite.com
— —