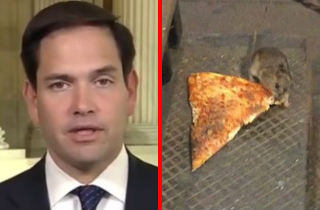 In an effort to keep costs down, Nevada campaign staffers for Republican presidential candidate Marco Rubio took advantage of a local pizza place’s offer of free Wi-Fi for customers.

The Associated Press recently surveyed the campaign’s efforts to operate with a “shoestring budget.” The fiscally-conservative efforts have apparently been a “point of pride” for the junior Florida senator’s team, and one of its major talking points throughout the campaign.

However, buried towards the end of the article is a little ditty about some not-so-nice cost-cutting measures taken in Nevada.

At one of the campaign’s Nevada offices, staffers tried to do their part to live up to the less is more mantra. After noticing a pizza place next to a campaign office had free wireless internet that required a password, a staffer walked over and bought two pieces of pizza and asked for the internet access code.

Three weeks on the business asked the Rubio campaign to stop using their Wi-Fi since it was reserved for current customers. And even though a staffer did buy some pizza in order to become a “customer,” this hadn’t become a regular enough practice to encourage the staff’s continued use of the Wi-Fi.

“(The campaign) told me this morning about the AP story and they told me that there might be media attention about my Wi-Fi and I was like, ‘What?'” he said. “That was first time I heard about them using it.”

Oberlaender also told the local paper that Rubio’s campaign staff were “customers and come in all the time to eat at my place — a whole bunch of people — so I am absolutely not upset.”

Someone claiming to be Oberlaender commented on this article Thursday afternoon. Here’s the full text:

Interesting! Let me introduce myself, my name is Sven and I am the owner of the Pizza Place next door to the Marco Rubio campaign office. First off I am appalled that they use a picture of a slice of pizza with a rat. We have constant A-Ratings from the health department and as far as I know there has never been a single rat in the building. Regarding the Wi-Fi: We offer free Wi-Fi to our customers. The Marco Rubio campaign people are good and regular customers who come almost on a daily basis. I, and no other staff member, has EVER ASKED them to stop using our customer Wi-Fi. This is simply made up and not true. I am unaware to what extend our Wi-Fi was used. But quite frankly I don’t see it as a big deal. They assured me they got their own Wi-Fi now and use it for their work. Rest assured: every customer can use our free wi-fi, no matter what political candidate you support. Come by if you are in the area: Rustica Pizzeria, 9730 W Tropicana Ave. (Tropicana and Grand Canyon).