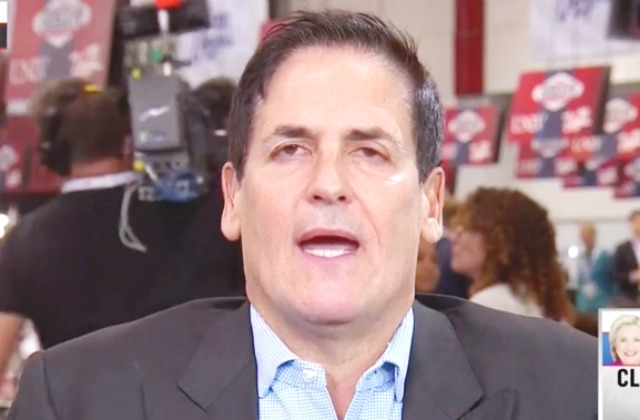 After months spent trying to troll then-candidate and now-President Donald Trump, Dallas Mavericks owner Mark Cuban is encouraging democrats to compromise with him and practice obstructionism.

In a series of tweets on Tuesday night, the Shark Tank star said that a strategy of blocking all of Trump’s moves is a strategy that’s doomed to fail, and a strategy that White House chief strategist Steve Bannon is “praying” democrats will employ.

If Dems are smart they will ask @POTUS what they can get from him in exchange for a quick @scotus approval. Negotiate with the negotiator

1) obstructionism was everything wrong with @tedcruz, Mconnell and the republicans. Every reasonable person HATED IT. It ruined governance

2)Bannon is praying the dems take the same approach.They will use it to expand their base and demonize Dems “See, they hate you & progress”

3)Trump would love to say he beat the system by making a deal. Gives him bragging rights. “Never been done before”
He isn’t a politician.

4) Deal makers love to make deals. Sales people love to sell. That’s who he is. All dealmakers will give you something. Get something.

5) Or dems can do business as usual. Obstruct every move. Treat him like a politician.

How did that work out in the election ?

The tweets came on the same night that Trump announced his nomination of Neil Gorsuch to fill the late Antonin Scalia‘s seat on the Supreme Court. In a report by POLITICO, Senate minority leader Chuck Schumer (D-NY) suggested his colleagues might opt for a more combative approach to Gorsuch’s confirmation hearing.

“The burden is on Judge Neil Gorsuch to prove himself to be within the legal mainstream and, in this new era, willing to vigorously defend the Constitution from abuses of the executive branch and protect the constitutionally enshrined rights of all Americans,” Schumer said. “Given his record, I have very serious doubts about Judge Gorsuch’s ability to meet this standard.”