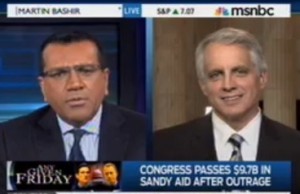 MSNBC host Martin Bashir called out former future Vice President Rep. Paul Ryan on his show Friday for voting against $9.7 billion in Hurricane Sandy relief, when, in 2008, Ryan was happy to pass flood relief as part of a $162 billion supplemental appropriations bill. What makes this more than your garden-variety liberal hypocrisy argument is that Bashir gave chapter-and-verse on Ryan’s vote to MSNBC Washington correspondent Mike Viqueira, who confirmed Bashir’s finding, and congratulated him on the good work. It was another fine demonstration that good opinion journalism can trump the presumed superiority of  the ostensibly “objective” variety.

The Republican House of Representatives, and particularly House Speaker John Boehner, has incurred well-deserved outrage over its refusal to act quickly on federal aid to victims of Hurricane Sandy, but even in passing a small part of the $60 billion package that the Senate approved, there were many dissenters.  On Friday’s Martin Bashir program, one of them got busted as a hypocrite, in a segment that perfectly illustrates how the sometimes problematic tension between “opinion” programming and “hard news” can produce better results than either format on its own. While hard news reporter Mike Viqueira had to react diplomatically to Bashir’s vehement characterizations, he also benefited from valuable research from Bashir’s staff.

“That might be the interpretation from some,” Viquiera replied, with a knowing smile, “particularly in the Tri-state area where you’re located, Martin.”

Viquiera explained that “They voted against it for the reasons Paul Ryan said. They said it wasn’t paid for, that the flood insurance program is essentially a bankrupt program. They’re essentially raising the debt ceiling on that, they object to that.”

Bashir then noted, of Rep. Ryan, that “in 2008 he voted in favor of additional disaster response funding for the flood ravaged Midwest. It was called roll call vote 432, to be precise. He touted it in his own press release. Has he lost all compassion in the last four years, or does he just not like people in the Northeast?”

With another knowing laugh, Viquiera responded, “Well, Martin, I cannot look into the man’s heart, but we can look at the fact that his own district around Racine, Wisconsin, Janesville was affected by some of that flooding in 2008. That was an enormous bill. Your producer sent me that roll call number, great work there. That was a $162 billion catch-all of the old school in Congress, that had all kinds of stuff in it. There was money there for overseas operations. there was money for military construction. There was money for flood relief. That was in 2008, and Paul Ryan and a lot of other people voted for that, you’re right.”

That roll call vote, on the 2008 Supplemental Appropriations Act, exposes several onions worth of hypocrisy on Ryan’s part. As Viquiera noted, that bill was packed with non-flood-related spending, most of it on the wars in Iraq and Afghanistan. While Republicans now insist on offsets for truly emergency spending on disaster relief, they happily voted for both of those wars, which were famously not paid for, incurred billions in waste, and were not even included in the federal budget. Along with the Bush tax cuts, Ryan’s votes for unpaid-for war funding blew up the federal debt that they now use as an excuse to nickel-and-dime suffering disaster victims.

But Ryan’s sick hypocrisy goes even deeper than that. In a statement that Bashir read on the air, Ryan explained his vote against the Hurricane Sandy aid by saying that the National Flood Insurance Program needs to be reformed. “It would be irresponsible to raise an insolvent program’s debt ceiling without making the necessary reforms,” Ryan said.

On its face, this is a somewhat ridiculous assertion, that people who are homeless due to an unprecedented storm should sit around and wait for Congress to reform a huge government program before receiving any relief. That’s akin to watching a house burn down while you go over the fire department’s bookkeeping. Still, a Ryan fan might be tempted to take him at his wide-eyed word, that this is really an agonizing vote of conscience in favor of a deeply-held principle. Sure, even a “reformed” National Flood Insurance Program might have had trouble anticipating the damage from the storm of the century, but Ryan is taking a stand for needed reform, right?

Well, not exactly. Rep. Paul Ryan took a stand for needed reform of the National Flood Insurance Program more than six months ago. It was called roll call vote 451, to be precise, and the measure that Ryan voted for contained a provision to address the very problem he now professes needs to be fixed before Sandy victims can get any help. Like any insurance program, the NFIP is required to keep a certain amount of cash in reserve for payment of claims, and the measure that Ryan voted for in June contained a requirement for the program to maintain a reserve equal to “1 percent of the sum of the total potential loss exposure of all outstanding flood insurance policies in force in the prior fiscal year; or… such higher percentage as the Administrator determines to be appropriate, taking into consideration any circumstance that may raise a significant risk of substantial future losses to the Reserve Fund.”

The act, which President Obama signed into law last June, contains a detailed schedule of when and how the program must meet that requirement, a schedule that Paul Ryan personally approved:

So, Ryan is insisting on reforming a program that President Obama already reformed exactly how Paul Ryan wanted him to. His next objection will surely involve waiting until water is wet.

Whether you agree with Martin Bashir’s politics or not, there’s no denying that the research he provided to Viquiera added valuable context to his reporting, research that might otherwise have been overlooked, and Viquiera was more than able to handle Martin’s commentary with journalistic detachment. The result was a more comprehensive report that served the public well, and shows that point of view isn’t necessarily a liability. When put to good use, it can be an asset.