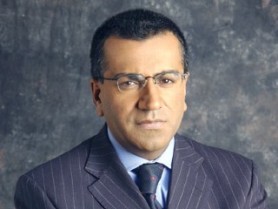 Martin Bashir is leaving ABC News’ Nightline and becoming an anchor with MSNBC. He will also contribute to NBC’s Dateline – just like Kate Snow, who left ABC for NBC earlier this year as well.

The MSNBC job will be a “daily afternoon program,” but there are no further details in the release. “I’ve followed Martin’s career for many years and have always admired his work,” said MSNBC President Phil Griffin. “He fits in with what MSNBC wants to be: he’s smart, original, and thoughtful. I couldn’t be happier to bring someone of his caliber to the network.”

Bashir writes, “It has been my privilege to partner with you at ABC and I shall forever be grateful for your professionalism, kindness and support,” while ABC News President David Westin writes in a note to staff: “Martin has been an important part of the successful Nightline effort. All of us owe him a debt of gratitude for his many contributions to ABC News during his six years here, and I know that all of us wish him well.”

Bashir joined ABC in 2004. There is no word yet on who takes Weir’s job at GMA.

All the details below…

I’m pleased to announce that Bill Weir will be joining Terry Moran and Cynthia McFadden as a Nightline anchor. Since joining us in 2004, Bill has done some of our most innovative reporting from every conceivable venue, both as co-anchor of weekend GMA and for all of our other programs and platforms. He has traveled the globe covering breaking news and uncovering global trends, including his coverage of Afghanistan last January where he came under fire with American troops, his in-depth reports on the economic rise of China and India, and the primetime hours he’s done on topics ranging from the rise and fall of General Motors to the pursuit of happiness around the world. Bill has been at the forefront of our adoption of all that new technology makes possible, often shooting his own material in the field and embracing new forms of reporting now possible in the digital world.

Under the leadership of James Goldston, Nightline has done what few imagined possible five years ago: It has combined groundbreaking and important journalism with an appeal to the audience that has led it to grow while others in its time period have declined. I’m confident that the addition of Bill to James’ extraordinary team will ensure Nightline’s success in the years to come, while at the same time the entire division continues to benefit from Bill’s contributions.

As Martin Bashir just announced to the Nightline staff, he will be leaving ABC News next month for a position at NBC News. Martin has been an important part of the successful Nightline effort. All of us owe him a debt of gratitude for his many contributions to ABC News during his six years here, and I know that all of us wish him well.

Please join me in congratulating Bill on his new job and thanking Martin for his service to ABC News.

I wanted to let you know, as my close working colleagues for a considerable period of time, that I will be joining MSNBC/NBC – to work in both daily and long-form journalism.

Before I say anything more – I must acknowledge my debt of gratitude to each of you. It has been my privilege to partner with you at ABC and I shall forever be grateful for your professionalism, kindness and support. I do believe that we have always sought to reach for the very best in all our journalistic ventures.

In the process, we have become more than colleagues – and so, even as I prepare to leave, I know that our friendship (which began six years ago) will continue into the future.

I do trust that the show will continue to enjoy success and that you will be as welcoming of Bill Weir as you have been of me.

With all good wishes,

NEW YORK – July 22, 2010 –Martin Bashir has been named MSNBC anchor and contributor to “Dateline NBC.” Bashir will anchor a daily afternoon program on MSNBC in addition to his new role with “Dateline NBC.” The announcement was made today by Phil Griffin, President of MSNBC. Bashir will begin at MSNBC and NBC News in September.

“I’ve followed Martin’s career for many years and have always admired his work,” said Griffin. “He fits in with what MSNBC wants to be: he’s smart, original, and thoughtful. I couldn’t be happier to bring someone of his caliber to the network.”

“I am absolutely delighted to be joining MSNBC and NBC,” said Bashir. “This is a rare and special opportunity – to host a daily news and current affairs show and also work on long-form journalism both at MSNBC and with ‘Dateline.’ This is an enormous privilege and I cannot wait to get started.”

Bashir is best known for making landmark documentaries including “Living With Michael Jackson,” which 27 million American viewers tuned in to watch in 2003 and prompted an extensive police investigation of the singer. He also conducted an exclusive interview with the Princess Diana, which remains the only television interview with her.

Most recently, Martin Bashir co-anchored ABC News’ “Nightline” since October 2005. He joined ABC’s newsmagazine “20/20” in September 2004. His first work for ABC was a memorable investigation into the BALCO steroids scandal that accused former US track star Marion Jones of cheating. In May 2008, Bashir anchored a documentary on the Sistine Chapel for “20/20,” which marked the 500th year since Michelangelo began painting the ceiling frescoes.

Additionally, his contributions to “Nightline” include an exclusive interview with a soldier in a prison cell in Kuwait. The soldier has been sentenced to life imprisonment for the premeditated murder of Iraqi civilians.