McMurry: Martin Bashir Reminds Us There’s Only One Way to Respond to Sarah Palin: Ignore Her

McMurry: Martin Bashir Reminds Us There’s Only One Way to Respond to Sarah Palin: Ignore Her 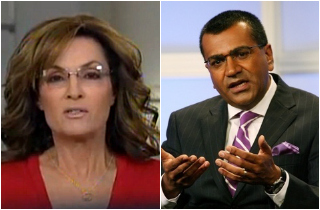 “I really have no response. Because last I checked, Sarah Palin’s not much of an expert on nuclear issues. If the Secretary of Defense and the Chairman of the Joints Chiefs of Staff are comfortable with it, I’m probably going to take my advice from them and not from Sarah Palin.”

Biff bang boom done. Obama’s terse non-response, requiring no more effort than swatting away a fly, remains the smartest and most effective rejoinder to Palin on record, and it serves as a reminder that the only response to Sarah Palin is to ignore her.

MSNBC’s Martin Bashir, as you well know, stepped in it last week when he addressed Palin’s “debt=slavery” comment. For what it’s worth, Bashir was absolutely correct in his rebuttal. The fringe right has a bad case of slavery Tourette’s, a mean and offensive obsession with likening the imaginary oppressions of contemporary society to the most horrific, systematized, actual oppression in this country’s history. This comparison serves two simultaneous functions for the right: it casts its membership rolls as victims, often for no greater inconvenience than paying taxes in exchange for services; and it strips from the history of slavery its roots in the systemic racism that still infects American discourse—an obvious benefit for a movement like the tea party, which is comprised largely of white voters despairing at their winnowing political influence.

In short, it turns slavery into “slavery,” a portable complaint that can be arrogated by anyone gauche enough to do so. Cue Palin. From “palling around with terrorists” to “death panels,” Palin is what we on the interweb machine call a troll, someone who does not make arguments to persuade but chucks provocative comments to knock her opponents off-balance, and, even better, off-topic. Palin, who didn’t win the 2009 Lie of the Year Award for nuthin’, is an major league troll, and she was 100% trolling when she compared the national debt to “slavery.”

Bashir took the bait. It’s hard to blame him, as the cynical misuse of slavery as a moral referent is enough to drive any person with an historical awareness batty. But Bashir made the mistake of thinking Palin was serious, and so he seriously responded, reminding Palin of the horrors of slavery as a means of denying her the use of the concept. If you want to compare your petty ideological hangups to slavery, Bashir was saying, you have to own the whole of your comparison, including and especially the parts of slavery that involved not just the figurative ownership of Palin’s comment but also the most tactile, literal acts of dehumanization—like, say, the slaveowner who made his slaves defecate into each others mouths.

This was a gross example—even, if you listen to his critics, vile and deplorable—but it was not Bashir who made it gross, vile, and deplorable. It was Palin who brought up slavery; Bashir was just following out the awful tendrils of her analogy. Don’t like stories about people being force-fed excrement? Don’t compare things to slavery.

But now, here he is, apologizing for saying someone should sh*t in Palin’s mouth. Now here MSNBC is, getting heat for not disciplining him. Somehow Alec Baldwin is involved. Note, nobody’s talking about the debt, because Palin was never serious about her analogy. But neither is anybody talking about slavery, because Palin was never sincere about that, either. Her aim was to drag someone exactly like Bashir, and an institution exactly like MSNBC, into the mud with her, and it worked like gangbusters. Palin now gets to play the victim, and just in time to hawk some copies of her Christmas book. (Suggested musical accompaniment!)

Bashir lost this round, but he lost it because he was battling somebody with nothing to lose. As Mediaite’s Tommy Christopher pointed out a few months ago, Palin’s star has fallen so low that when she recently announced she wouldn’t be challenging Mark Begich (D-AK) for his Senate seat, literally nobody noticed. For Palin, any exposure is good exposure, so she has everything to gain by throwing out comments like debt= “slavery,” just to see who pushes back and whether cameras will follow.

That, by the way, was exactly what she was doing when she criticized Obama’s nuclear policy. Obama’s response—”I have no response”—left her muttering something about “community organizers” as the cameras turned away. The only way to respond to Palin is to ignore her. Let’s hope Martin Bashir is the last person to have to learn that lesson.