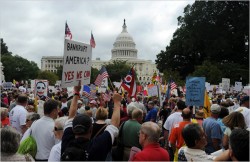 Perhaps the most amazing thing about Maureen Dowd’s column in today’s New York Times is it is the first time I have heard someone in the mainstream press suggest that Joe Wilson’s heckling of the President last Wednesday was racially motivated. It is perhaps a measure of how Obama is viewed by the nation, as well as the press, that despite this summer’s name-calling, town hall circuses, and yesterday’s deranged 9/12 tea party, that eight months in to the nation’s first black presidency the only person to be labeled a racist thus far is the president himself, and by none other than Glenn Beck (nuff said there).

But MoDo isn’t afraid to go there. In Sunday’s column, Dowd takes a larger look at the role South Carolina has played in national racial politics in the past, suggests they are still occupying that role, and moreover fears that all the name-calling directed at the President this summer is motivated by underlying racial fear.

Every once in a while Maureen Dowd aims for the fences with her columns, and whether you agree with her conclusion or not — it’s often hard to tell whether she is writing what she thinks or writing to antagonize — this is one of those times. And being that she not only has a tendency to press buttons but occupies one of the most valuable pieces of real estate in journalism, I think it’s a fair bet that this will become a talking point for the cablers tomorrow. And no, she does not suggest the President and Joe Wilson sit down for a beer. The whole column is worth a read, but here’s what she had to say, at a glance.

Surrounded by middle-aged white guys — a sepia snapshot of the days when such pols ran Washington like their own men’s club — Joe Wilson yelled “You lie!” at a president who didn’t.

But, fair or not, what I heard was an unspoken word in the air: You lie, boy!
*
The congressman, we learned, belonged to the Sons of Confederate Veterans, led a 2000 campaign to keep the Confederate flag waving above South Carolina’s state Capitol and denounced as a “smear” the true claim of a black woman that she was the daughter of Strom Thurmond, the ’48 segregationist candidate for president. Wilson clearly did not like being lectured and even rebuked by the brainy black president presiding over the majestic chamber.

I’ve been loath to admit that the shrieking lunacy of the summer — the frantic efforts to paint our first black president as the Other, a foreigner, socialist, fascist, Marxist, racist, Commie, Nazi; a cad who would snuff old people; a snake who would indoctrinate kids — had much to do with race…But Wilson’s shocking disrespect for the office of the president — no Democrat ever shouted “liar” at W. when he was hawking a fake case for war in Iraq — convinced me: Some people just can’t believe a black man is president and will never accept it.