What Does It Mean To Have A Million Twitter Followers? 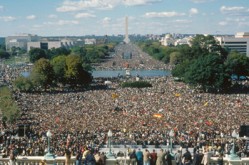 What does it mean to have a million Twitter followers? Does is matter? The short answer is yes. Also, it’s much the same as attending your own wedding, according to Clay Shirky.

Shirky was on NPR’s Weekend Edition yesterday and gave a great explanation about how, and why, Twitter is such a powerful tool for those in the media world (and perhaps those who want to get in) beyond telling people about the contents of your breakfast. Specifically those lucky few, such as NPR host Scott Simon, who have racked up an enormous amount of followers (Simon belongs to the million high club). Among other things, it means you are your own “broadcast outlet,” with a built-in audience roughly the size of Rhode Island (also, Montana, Delaware, and South Dakota).

SIMON: Clay, I have a million followers on Twitter. What does that mean?

Mr. SHIRKY: It means a million people are willing to hear what you have to say or offer or point to. I mean it – the meaning of something like that is really variable across a whole range of scale.

SIMON: I mean, we’ll point out that our radio audience is considerably larger than that, several times that.

Mr. SHIRKY: Right, of course. Yeah. No. Right, but if you have a million followers it really means you are kind of a broadcast outlet. You can’t follow a million people, both because you don’t have the time to do it and because Twitter wouldn’t let you. The system doesn’t scale in that direction, only in the direction of follower-ship.

So it means at your skill, no matter what the medium allows, you’ve become a kind of micropublisher on Twitter. Right? If I only have five followers on Twitter, we’re probably a cluster of friends who are all following each other. So you get these different scales from the kind of conversational scale you might have at a dinner party, all the way up the Scott Simon audience of one million without any break in the technology. It used to be that one kind of technology was for two-way communication with your friends. Right?

Mr. SHIRKY: You pick up the phone. Another kind of technology was for broadcast. You listen to the radio. Now you’ve got a phone that can turn into a radio without ever changing the underlying tools. And that mix and match of media patterns that were formerly completely distinct is one of the big changes in the current era.
*
Mr. SHIRKY: There is absolutely something special to the relationship. All I mean is you can’t have a two-way conversation with a million people.

Mr. SHIRKY: The closest most of us get to this is our wedding day, when you gather, you know, as many of the people you most love and would want to talk to in the world that you can get in one room. And then you suddenly realize I got three hours. And so, there is a constant width versus depth tradeoff, where you can either talk to a few people for a long time, or you could talk to a lot of people for a short time. But you can’t actually do what you want to do.

Mr. SHIRKY: What your million-person Twitter audience is, is that wedding problem every day you’re on Twitter. Which is you’re at a scale where you can’t sit down and talk to each one of the million people for three hours in a human lifetime.

The full transcript is here. Or, if you prefer, you can listen to their dulcet tones here.