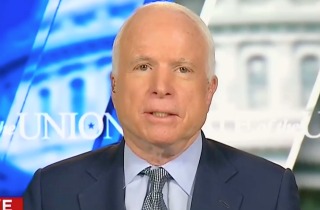 In an interview with radio host Hugh Hewitt on Monday, John McCain was asked to respond to President Obama‘s speech on ISIS and the government’s approach to extremism, both domestic and abroad. Hewitt and McCain agreed with the president’s statements as far as the Charleston Shooting was concerned, but then said that Obama’s failed in his promise to get the military out of the Middle East for good, and that his approach to ISIS was “a classic case of delusion.”

“The fact is the president came to the presidency to get us out of conflict no matter what. He didn’t,” McCain said. “What he didn’t understand is that just because we leave does not only mean that the conflict doesn’t end, but it escalates.”

Hewitt then brought the discussion to a later part of Obama’s speech, where he argued that when dealing with religious extremists, “Ideologies are not defeated with guns. They’re defeated by other ideas, a more attractive and compelling vision.” Hewitt then brought up McCain’s previous experience in the Korean and Vietnam wars, and said “it would have been news to them that ideologies can’t be defeated by guns.”

While McCain agreed that reaching a point of agreement with Islamic leaders was important, he said that it was most important to have everything follow a victory on the battlefield. “There’s no doubt there’s ideological struggle here. There’s no doubt there’s an economic problem in those places in a world where they have gigantic youth unemployment,” said McCain before quoting Otto Von Bismarck and saying “the issue will be decided by blood and steel.”

You can listen to McCain’s segment on the speech here: