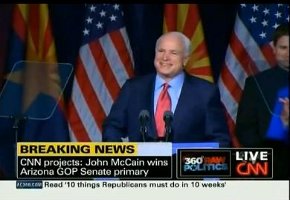 For all the hype surrounding the John McCain–J.D. Hayworth Arizona Senate primary, all the entertainment Hayworth gave us – this was an anticlimactic conclusion. The AP reported McCain as the winner with barely over 10% of precincts reporting, and McCain holding an overwhelming 59%-30% lead. As for whether McCain will shift away from the right now that he’s won – not if his victory speech (notably absent from two major cable news networks) is any indication.

McCain earned criticism for some of his campaign actions, including this flip-flopping ad and this absolutely mind-blowing bit of revisionist history. But none of it was nearly enough to derail him – also, the fact that Hayworth’s a bit out there probably helped, as did McCain’s lavish spending.

In the AP’s writeup on McCain’s victory, former McCain staffer Bruce Merrill guessed (and hoped) that McCain would now move back toward the political center, back “to trying to be a consensus builder.” Here are a few choice excerpts from McCain’s speech tonight, which you can watch below – and was carried only on CNN, as Fox News and MSNBC instead ran the usual O’Reilly Factor and Rachel Maddow Show repeats:

No one is satisfied with the current condition of our country.”

“I am convinced that Republicans will win in November and we will regain our majorities in both the Senate and the House!”

“We will stop the out-of-control spending and tax increases, and repeal and replace Obamacare!”

Considering the audience he was speaking to, probably all smart things to say, but not exactly the words of a consensus-builder. Then again, if he’s switching back to the center at all, he’ll need time to make it subtle. Either way, he’s a virtual lock to win the general election. Video of McCain’s speech: