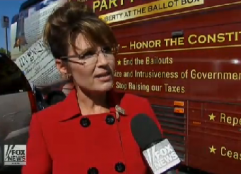 During a short interview on Fox News yesterday from one of her Tea Party Express stops Fox News contributor Sarah Palin was asked how she felt about Maureen Dowd calling her Queen Bee of the mean girls in her column over the weekend. Said Palin:

Probably not. But if they ever do meet someone should sell tickets. Moreover, it’s a shame that Palin doesn’t read MoDo, if she did she would know that Dowd calling other women ‘mean girls’ after the kind of coverage she piled on Clinton and Obama during the 2008 campaign is, to put it mildly, the pot calling the kettle black.

Meanwhile, Palin has a number of people up in arms because in the same interview she seemed to suggest that if the Republicans weren’t careful there could be a third party on the 2012 Presidential election horizon.

What I want to encourage Tea Party America about is to keep the faith. You know they’ve been slandered, they’ve been lied about by mainstream media calling them racist, calling them fear mongers….and none of that is true… Some in the GOP, it’s their last shot, it’s their last chance. We will lose faith, and we will be disappointed and disenchanted from them if they start straying from the bedrock principles. … If they start straying, then why not a 3rd party?

This is not, by the way, the first time Palin has hinted at a third party. She did so last December telling radio host Lars Larson that “if the Republican party gets back to that [conservative] base, I think our party is going to be stronger and there’s not going to be a need for a third party, but I’ll play that by ear in these coming months, coming years.” Of course, it is utterly unlikely Palin is going to start a third party — or for that matter do anything that would require her to take any sort of civic responsibility — but threatening to do so every once in a while is certainly a genius way to keep a scattered GOP in line. Watch below.