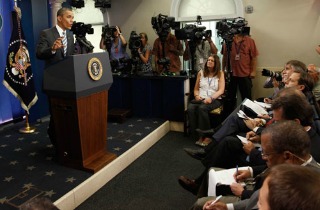 “At a time when our discourse has become so sharply polarized, at a time when we are far too eager to lay the blame for all that ails the world at the feet of those who think differently than we do, it’s important for us to pause for a moment and make sure that we are talking with each other in a way that heals, not a way that wounds.”

These were the words spoken by President Barack Obama on January 12, 2011. Days earlier, a mentally disturbed individual shot 18 people, killing six, in front of a Safeway in Tucson, Arizona. Among the killer’s victims was a gravely wounded Democratic Congresswoman. The event prompted a flurry of calls for moderation and appeals to sanity from the press – appeals primarily directed at recently ascendant tea party conservatives. They were blamed irrationally and erroneously for the sharp rise in partisan rhetoric which, along with the so-called martial metaphors that have been associated with politics since the Greek city-states began to experiment with popular democracy, supposedly led to this act of senseless violence.

Obama’s speech at the Tucson memorial ceremony was among the best he had ever given up to that point. It remains a triumph. The president spoke precisely to the moment. It soothed the nerves of Obama’s wounded and defensive supporters and grounded conservatives still seething after a heated midterm campaign season. The only problem with that speech was that it was entirely dishonest. Obama merely produced a disingenuous and perfunctory nod toward the comity for which so many hand-wringing Beltway reporters and editorial writers were clamoring.

At the time, Obama still believed he had the wind at his back. In spite of the political setbacks of 2010, the president thought he could govern and continue to pursue the sweeping reform agenda of which his recently passed health care reform law was only the first step. But as the president’s political prospects have dwindled, so have his and his supporters rhetorical appeals to rabid partisanship increased.

The Washington D.C. columnists are silent. Their once paramount desire for civility has disappeared.

This is somewhat due to the fact that so many in the Acela Corridor media establishment agree with the White House’s aims and mischaracterizations of their opponents motives. But it is also partly due to simply having become inured to the White House’s regular rhetorical overreach. The American public, too, has become accustomed to the Obama administration vilifying its political opponents in ways that would have horrified many just three short years ago.

Pfeiffer did not even flinch while comparing the president’s political opponents to suicide bombers and arsonists. For those unclear as to why this is abominable and excessive language for a representative of the White House to use, follow this link to see what suicide bombers do to people. The fruits of their evil work are far too graphic to reproduce here.

But this offense merited hardly a peep from the Beltway set that once rent garments over the excesses of the tea party and the threat their discourse presented to American self-governance. Why? Perhaps because they are acclimated to this administration’s all-too-common practice of linking their opponents to violent and deranged criminals.

This is the White House staffed by campaign professionals who thought it a valiant and effective tactic to imply that Mitt Romney was complicit in a criminally negligent homicide. When a noble few expressed their exception to this latest example of the Obama campaign’s overreach, his advisors tried to say that it was merely an overzealous and unaffiliated group which had run the offending ad. Only later did audio of Deputy Campaign Manager Stephanie Cutter (now a CNN host) surface demonstrating that the highest levels of the campaign had orchestrated the attack.

This is an administration which does not see a problem with Joe Biden, the Vice President of the United States, calling the White House’s Republican opponents in Congress “the Neanderthal crowd.” Indeed, nobody in the press really did either. Those who did not expressly agree with this characterization of the GOP were unmoved to protest it because it is simply par for the course for this administration.

In 2011, the last time the Obama administration had to contend with the irritating task of actually negotiating with their opponents over the nation’s escalating debt, Biden was also implicated in an episode of rhetorical overreach. The White House’s regular insistence that Republicans were holding the nation’s economy “hostage” in order to limit the unsustainable explosion of federal spending had resulted in one Democrat in Congress taking this line of attack to its logical conclusion. He said that Republicans in Congress had “acted like terrorists.”

The event occurred in a closed-door meeting, the details of which somehow leaked out into the press. Biden reportedly agreed with this characterization and was hounded by the press to explain this infraction. The Vice President enthusiastically insisted that he had never agreed with this inflammatory characterization of America’s Republican representatives in Congress. To call the majority party in the U.S. House of Representatives was, at that time, a violation of agreed norms of civil behavior.

Where is the press today asking if Pfeiffer’s statement represents the views of the president? Where are the thought leaders disturbed by the trajectory of American political discourse? What has changed so dramatically in the two and a half years since Biden’s last transgression merited such blowback from the press? The answer is quite simply that the shock value of such comments has worn off. They are now the commonplace attacks on this administration’s political opponents.

Obama was correct in his 2011 Tucson address – an address which touched on themes he clearly did not believe but felt obliged to express – that sharply partisan rancor and demonization of those with divergent political values is deleterious to the relative harmony which keeps a republic functioning.

It is true that American history is punctuated with periods in which partisan politicians hammer their political foes with withering verbal assaults. The republic has survived and it will continue to endure long after Obama has left the White House. But the Democrats latest series of rhetorical offenses against comity have demonstrated something rather important: the media does not really care about excessive partisanship, acrimony, or incitement in politics. At least, they don’t care when it is directed at Republicans.