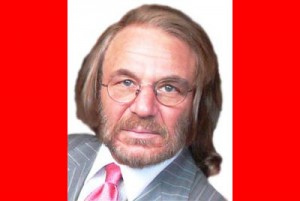 Republican presidential candidate Donald Trump has been promising a full report on his health for some time. Well, said report finally arrived on Monday and it didn’t disappoint. Not one bit.

Why? Because, like Trump, the health report was as boisterous and bloated as the New York real estate mogul’s campaign for the White House has been. Plus, the world finally got to meet his personal physician — a gastroenterological specialist by the name of Dr. Harold N. Bornstein.

There’s a lot to unpack here, so let’s look at Trump’s announcement first. He writes on Facebook that he is “proud to share this report,” which he claims was “written by the highly respected Dr. Jacob Bornstein of Lenox Hill Hospital.” This is already false, because the opening lines of the report contradict the name of Trump’s doctor.

Statement from Trump's doctor on his health: pic.twitter.com/bVwR0d8psn

Dr. Jacob Bornstein was Trump’s personal physician until his son Harold took over in 1980. So either Trump is being nostalgic with his announcement, or he just doesn’t care enough to remember the name of his doctor.

This leads us to the statement itself, which has… problems. Like a weirdly-worded salutation (“To Whom My Concern”) and many other noticeable grammatical (and personality) issues.

Doctor who wrote Donald Trump's health report addresses it "To Whom My Concern," etc. https://t.co/eb1GGRSYKW pic.twitter.com/VWQoRt6jOD

I am perhaps most concerned that Donald Trump's doctor uses two spaces after a period. pic.twitter.com/55Uit9lexy

Last but not least, there’s Harold Bornstein himself. He’s probably a wonderful doctor, and no doubt deserving of Trump’s wealthy patronage. Yet the Internet (i.e. Twitter) just cannot help itself when confronted with a face (and haircut) like his.

You know it's really Donald Trump's doctor because they share the same hairstylist. pic.twitter.com/09NV3VQ1m3

"As Mr. Trump's longtime doctor, I can further unequivocally state that I look Ron Rifkin with 'The Rachel.'" https://t.co/WZZ4EAo1qR

Some kind of weird parody Twitter account using Bornstein’s name has existed since 2013. There’s not much to it… except for an even more amazing picture.

This man performed a physical on Donald J. Trump pic.twitter.com/mAwQko4Wul

trump's doctor harold bornstein hasn't used his twitter much but what a pic https://t.co/aqveezW0ZQ pic.twitter.com/AA5hPNgbjN