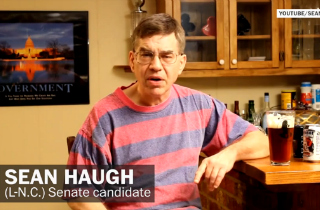 The Washington Post had an illuminating Sunday report on the craft beer-drinking, folksy-talking libertarian who may play a drastic role in altering North Carolina’s upcoming U.S. Senate election between incumbent Democrat Kay Hagan and her GOP challenger in State House Speaker Thom Tillis.

While his videos have barely made a dent in viewership, WaPo reports that his campaign is pulling between 8 and 11 percent of voter support, putting him in a position to affect the outcome of the race. One polling director told the paper that if the election comes down to a one- or two-point margin, Haugh could ultimately hand the seat to Hagan.

With Hagan’s current polling lead between one and four points, I can already hear it now come November: Partisan Republicans attack libertarians for helping a Democrat retain her seat by sucking voters away from the GOP.

So what actually costs the GOP the vote? Not offering better candidates that appeal to the disillusionment voters feel on both sides of the aisle. That’s the main reason libertarianism has seen a rise in prominence over the last 5-7 years.

And yet it does feel like while libertarian-leaning Republicans like Rand Paul and Justin Amash have taken the spotlight in recent years, there really might be no room for a wide-scale acceptance of more tried-and-true libertarians in the GOP.

In one campaign video, Haugh says “I’m a libertarian because I know I’m not smart enough to run your life for you.” And unlike the vast majority of the GOP — who make overtures to that “live and let live” concept, but never follow through — this Libertarian candidate actually believes it. To wit:

“So I hear you want to get married? Awesome. I wish you every happiness. Mazel tov!”

“You know what burns me? That the state thinks it can come into my bedroom and judge my marriage. You don’t have the right to judge in the first place, so get out of my bedroom, you perverts!”

“It really doesn’t matter how you feel about a woman’s right to choose. It’s her body and her mind, she is the one that’s going to make that choice.”

Some conservatives will predictably suggest this type of person is unwanted in the GOP because he’s a social liberal. Except, guess what, his small government views extend to economics too (as if the devotion to near-anarcho-capitalist Austrian economics didn’t tip you off already). Consistency! Who knew:

“We have got to stop spending more money than we have. Stop voting for politicians who do.”

While it is at least partially lamentable that come election time, libertarians become the Republicans’ scapegoat, it’s also a positive development that folks like Haugh are making trouble: Having both parties seriously look over their shoulder at third party candidates — no matter how long-shot and folksy they are — can only be a force for good.

(Here are some more thoughts on Republicans failing to court libertarians, circa GOP’s 2012 Romney desperation.)

Watch Haugh’s highlights below, as gathered by WaPo: