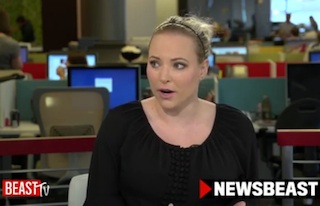 Meghan McCain has yet to watch HBO’s Game Change. That’s understandable. It’s tough to watch a movie based on your own dad’s struggles. I know I had a hard time watching Superman 2 (What? You didn’t know my father is the last son of Krypton? God, check my bio sometime, reader!). She has seen some of the movie’s promotions though and she is not happy with her dad’s former advisors Nicolle Wallace and Steve Schmidt.

Of course, McCain hasn’t been happy with those two for a while, not since the book Game Change came out at least. However she got downright hyperbolic in her talks today on Newsbeast, the online talk show of the Daily Beast.

“This has actually been a pretty painful, in a weird way, experience. It’s moreso that I get to relive these people like Nicolle Wallace going on TV and sort of being proud of the fact that she worked for my father’s campaign and then didn’t vote for him. This was my life. It’s a huge legacy of my family and seeing that is sort of the most egregious disloyalty I’ve ever seen in politics. I think if Steve Schmidt and Nicolle Wallace ever had any kind of respect for what the campaign was, they should show a little bit more respect for my family and what kind of a historic thing that they had the opportunity to be a part of.”

McCain also told a story about yelling out “I hate you!” at the co-author of the original book Mark Halperin in the

On a previous edition of Newsbeast, McCain said she probably wouldn’t watch the HBO movie because she was sure it would depict her family poorly. However, today, host John Avlon told her that her father actually came across very well. Still, if she doesn’t like the story as a whole, it’s unlikely one performance will change much.

That’s why I never watched Superman 4. All lies that film!

Watch the video from the Daily Beast below: