Michele Bachmann: ‘Not Far-Fetched’ To Say Government Could Limit Number Of Babies Born Per Family 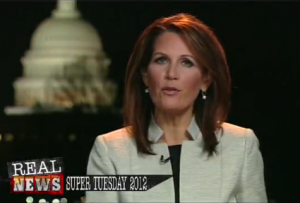 It’s no secret Michele Bachmann opposes President Obama‘s health care plan. On Tuesday night, she made this abundantly clear during her appearance on GBTV’s “Real News From The Blaze.” Bachmann, touching on the economic argument for the birth control mandate, said the federal government, should it choose to do so, could limit the number of babies born per family.

Bachmann was going off a comment made by Kathleen Sebelius, the Health and Human Services secretary. A few days ago, Sebelius, in response to a question about the cost of the contraception mandate, said: “The reduction in the number of pregnancies compensates for cost of contraception.” Congressman Tim Murphy, who posed the question, responded, “So you are saying, by not having babies born, we are going to save money on healthcare?”

Bachmann’s reaction was along the same vein:

“Going with that logic, it isn’t far-fetched to think the President of the United States could say…we need to save health care expenses…the federal government will only pay for one baby to be born in the hospital per family. Or two babies to be born per family. That could happen.”

The program’s anchor, Amy Holmes, followed up, asking Bachmann if she’s “suggesting that this administration, or a next administration, would actually advocate a one-child policy like Communist China?”

Bachmann clarified that if the president can “unilaterally” tell insurance companies to provide services, such as contraceptives and sterilizations, for free, then “the health care dictator could conceivably make that order as well.”

“I’m not saying he’s going to do it,” she further added. “I’m saying he has the power and authority to do it.”

Take a look, via The Blaze: