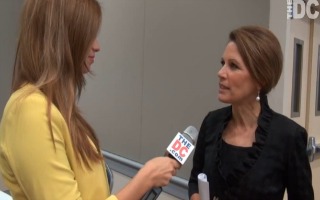 On Wednesday, The Daily Caller’s Michelle Fields interviewed Rep. Michele Bachmann (R-MN) and asked for her opinions on the death of liberal playwright and political author Gore Vidal. Bachmann told Fields that Vidal’s “snotty, mocking attitude” made her a conservative.

Bachmann told Fields that she read Vidal’s book Burr while growing up as a young and idealistic liberal, but the tone of the author’s writing turned her off to liberalism.

I had been a Democrat and I’d actually worked on Jimmy Carter’s campaign and I was reading a novel by Gore Vidal and when I was reading it he was mocking the Founding Fathers and all of the sudden it just occurred to me, I set the book down on my lap, I looked out the window of a train I was riding in and I thought to myself, ‘I don’t think I’m a Democrat. I think I really am a Republican.

“The Founding Fathers were not the characters that I saw Gore Vidal portraying in his novel and that snotty, mocking attitude to me didn’t in any way reflect who we are as a nation,” said Bachmann.

Bachmann concluded by saying that, in an ironic way, she was grateful to Vidal for the political transformation he helped her undergo.

That’s a completely different philosophical view of the United States, and I know that Gore Vidal has passed away today, I understood he’s 86 years old, and it’s interesting how his work, while he intended it, I think, one particular way, it was used actually to help me see a completely different way which is the conservative way. I started then examining the conservative position and realized at heart, I really am a conservative and that’s far more reflective of American values than the values that Gore Vidal was espousing.

Watch the interview below via The Daily Caller: