Michelle Fields Rips Trump for Lying, Hannity for Not Calling Him on It
video

Michelle Fields Rips Trump for Lying, Hannity for Not Calling Him on It 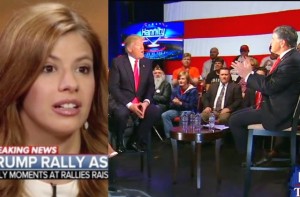 Donald Trump continued to insist tonight on Fox News that the whole Michelle Fields thing was completely overblown, and Fields fired back at him and his interviewer, Sean Hannity.

In yet another Hannity-Trump town hall, the Fox host asked Trump about Corey Lewandowski grabbing Fields and the ensuing fallout. Not once did he challenge Trump on the inconsistencies from his campaign or the fact that he and Lewandowski had denied anything happened at the outset, but he even backed up Trump with supportive words as the GOP frontrunner retold his account of what happened.

Trump claimed once again––a claim he suddenly started remembering recently––that Fields grabbed him, so maybe he should sue her. The audience went wild.

Insane. @realDonaldTrump knows I didn't do this. Continues to lie and lie and lie. https://t.co/QfYN4bbKpP

And she had some tough words for Hannity for not challenging him on any of it:

This whole situation is insane. So sad to see my "friend" @seanhannity not challenge Trump on his lies https://t.co/kLTxb8JIqg

Ok. @Michellefields I wrote u privately. I watched the tape 150 times. I do NOT see what u allege. Sorry I don't. https://t.co/MLVgeQRZSx

And Fields hit back:

@seanhannity you're not even going to challenge @realDonaldTrump when he so obviously lies and says I grabbed him?

UPDATE — 8:53 A.M. EST: Hannity and Fields were not finished with each other last night, as their Twitter correspondence carried on into the morning.

My point is I didn't see you "jolted backwards"and "yanked down". And I did not see u "nearly fall to the ground" https://t.co/Fv6bdmu5cg

Alright @seanhannity. Ignore all the evidence. Congrats I'm sure this will earn you another town hall with Trump