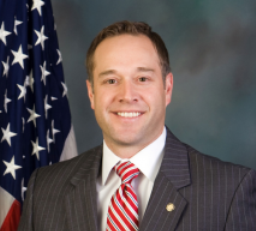 Pennsylvania State Representative Mike Fleck (R-Huntingdon) just announced that he is gay, and in doing so, became the first and only openly gay Republican state legislator in the United States and the only openly gay lawmaker in all of Pennsylvania.

Fleck relayed his story to Pennsylvania’s local Huntingdon Daily News. Acknowledging the difficulty of his decision to come out, partially due to his devout catholicism, Fleck underscored to his constituents that he was “still the exact same person.”

He went on to note, “Coming out is hard enough, but doing it in the public eye is definitely something I never anticipated.” He also made clear his intention to continue both within the Christian faith and the Republican party, saying, “I’m still a Republican and, most importantly, I’m still a person of faith trying to live life as a servant of God and the public. The only difference now is that I will also be doing so as honestly as I know how.”

Fleck has traditionally been a moderate Republican and believes that his affiliation with the GOP can help, not hinder, his coming out: “The Republican party is all about the government needing to stay out of people’s lives. I’m not a one-issue person and it’s not a one-issue party.”

Martin is hopeful that Fleck’s announcement will pave the way for a more open discussion about gay rights in the Republican party:

“There’s an opportunity here to have an open discussion in a new way. There’s a real live voice to talk about it inside the Capitol, inside the Republican caucus. I hope Representative Fleck will want to work with us […] I respect his process, respect that this isn’t easy. I would hope people respect his integrity and his privacy.”