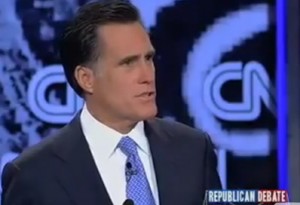 One question that was conspicuously absent from Monday night’s Fox News South Carolina Republican Debate was whether the candidates endorse that state’s continued flying of the Confederate flag in front of their capitol. With yet another debate scheduled for tonight, on CNN, the issue may come up, as it did at 2008’s CNN South Carolina debate. Current frontrunner Mitt Romney spoke out clearly against the flag then, while challenger Newt Gingrich recently defended the flying of the Confederate flag.

In 2000, the state of South Carolina reached a compromise on the issue of the Confederate flag, which used to fly over the capitol dome, but is now relegated to a less-prominent position in front of the capitol. That compromise, though, was overwhelmingly rejected by the state’s black caucus, and by the NAACP. The NCAA still boycotts South Carolina over the decision.

Gingrich was recently asked about flying the flag in South Carolina (the questioner was booed), and responded with the predictable “states’ rights” argument, then undercut that argument by claiming he was against segregation and slavery, two other issues that have historically been tied to states’ rights, under that same flag. Here’s the exchange, via ThinkProgress:

Newt’s reasoning flies in the face of the Civil Rights movement, which seeks to protect minorities from the tyranny of the majority. It’s a convenient, winking dodge.

Current frontrunner Mitt Romney, on the other hand, spoke out so strongly against the Confederate flag in 2008, a pro-Confederate group actually ran ads against him (and John McCain). When Romney was asked about it at that 2008 debate, he began with that realpolitik look of discomfort, hemming a bit and saying, “I’m not going to get involved in a flag like that” (translation: I wish you weren’t asking me this!), but to his credit, went on to say he agreed with the rest of America’s decision not to fly that flag, and spoke about its divisiveness:

There are probably a lot of conservatives who will groan at this question and consider it a trap, but really, it is a great crucible to judge the courage and conviction of these candidates. Avoiding the question of whether the Confederate flag is a racist symbol by evoking “states’ rights” is sheer (ironic) cowardice. If you believe all of that “Heritage, Not Hate” guff (funny, you never hear German-Americans clamoring to fly a Nazi flag on public property), you ought to be willing and able to articulate that point.

If you believe it is a symbol of racism, of those who fought under it to protect the enslavement of other Americans, you should say so, even if you think it might cost you some votes in South Carolina. Hell, if you make your case well enough, you might change a few minds.

Nobody is saying you can’t fly the flag on your lawn or at your business. State property, however, belongs to members of the United States of America. When I want to show that I’m proud to be from New Jersey, I fly the Jets flag, but I don’t expect anyone to run it up the flagpole in Trenton. If only.

There may be a legitimate gray area (pardon the pun) with regard to the historical significance of the flag and those who died for it, but the folks I see displaying it don’t really look all that much like historians. Any reasonable person would see that whatever weight is on that side of the scale is a feather compared to the weight of terror and misery on the other.

Even if you just want to display the flag because you’re a bigot, that’s fine. This is a free country, and all in all, I think we’d rather know who you are. I just don’t think that decent people should have to pass under it on their way into a state capitol, just because 51% or more of their neighbors are knuckleheads.

Romney hasn’t weighed in on the flag during this election cycle, and perhaps he would rather not, but if CNN is at all worth their salt, they’ll ask him about it tonight.