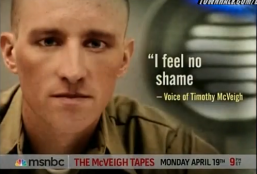 Perhaps not surprisingly, Timothy McVeigh’s name has been in the news a lot of late. This April 19 marks the 15th anniversary of the Oklahoma City bombings, meaning that regardless of what was going on in the world we’d likely be talking about him. However, add to that anniversary the recent elevated political rhetoric, the threats against politicians that followed the Health Care vote, the recent arrest of a violent militia in Michigan, and the general anti-government sentiment of the Tea Party, and, well, his name has been coming up a lot more of late.

That said, I think MSNBC might be making a bit of leap in their promo for an upcoming special on McVeigh, hosted by Rachel Maddow, marking the April 19 anniversary, during which they will play tapes of McVeigh speaking. Says the voice-over in the promo: “15 years later can McVeigh’s words help us understand today’s anti-government extremists.” Um, which anti-government extremists? The promo does not bother to articulate.

Of course, should they be referring to the Hutaree group from Michigan than it’s not a great leap — the Hutaree fully intended to commit violent acts — however, the language of the promo seems to be suggesting that “anti-government extremists” are a national problem or trend, which suggests to me that they may be sweeping the Tea Partiers into their definition of extremists, and since there is not only no evidence of violence on the part of the Tea Partiers but recent polls suggest the group is more representative of the mainstream than most cablers would have you believe. We are no longer talking fringe. Nor will we likely learn anything about them by listening to Timothy McVeigh. Promo below.