Must Reads: How Not to Cover the State of the Union
MUST READS

Must Reads: How Not to Cover the State of the Union 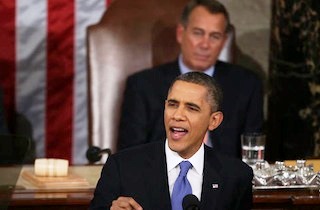 A round-up of criticism and commentary about the intersection of politics and media. Today: how NOT to cover the State of the Union, some healthy skepticism on Ezra Klein’s new media venture, whether Twitter is becoming a monster, and more.

“Will Reporters Miss the Real Story on the State of the Union Again?” (Brendan Nyhan, Columbia Journalism Review)

“The evidence is clear that while State of the Union addresses may help make issues or proposals somewhat more prominent, they’re unlikely to change Obama’s approval ratings much or increase Republican support for his agenda in Congress…”

“The Web — so elemental in making Ezra Klein a big and sudden success — is also his biggest threat. None of the wildly successful websites — not the Huffington Post, the Gawker galaxy of sites, the BuzzFeed verticals, Glam Media’s properties, nor Vox Media — can rely on a moat to protect them from new competition…and unless tethered by contracts, talent can easily become new competitors (in other words, any Ezra that Ezra discovers will likely pull an Ezra on him)…I’m not selling Klein short, mind you. But neither am I going long.”

“Telling Stories About the Future of Journalism” (George Packer, The New Yorker):

“One thing Internet journalists are never short of is commentary—many of them, such as Klein and Matthew Yglesias, who will leave Slate to join the new project, have been specializing in it since they were fledgling bloggers…What the Web has never figured out is how to pay for reporting, which, with the collapse of print newspapers, is in desperately short supply, and without which even the most prolific commenters will someday run out of things to say…”

“We’re sold on the idea that if we’re good enough, it could be our ticket to success, landing us a fleeting spot in a round-up on BuzzFeed or The Huffington Post, or at best, a writing gig. But more often than not, it translates to standing on a collective soapbox, elbowing each other for room, in the hopes of being credited with delivering the cleverest one-liner or reaction. Much of that ensues in hilarity. Perhaps an equal amount ensues in exhaustion…”

“The words ‘not ready for prime time’ come to mind, a concern that some Democrats privately shared with me months ago. At some point the campaign must switch its attention from playing defense to an attack posture, but I’m very skeptical that the Davis campaign has the talent and the knowledge of state issues to take Abbott on…”

Music Accompaniment of the Day: If living well is the best revenge, Pete Seeger sure had his on the House Committee of Un-American Activities. Blacklist this: