My Fearless Predictions For 2013: Bye-Bye Boehner, Tebow-To-Go, Cutter In/Carney Out, And Other Prophecies

My Fearless Predictions For 2013: Bye-Bye Boehner, Tebow-To-Go, Cutter In/Carney Out, And Other Prophecies 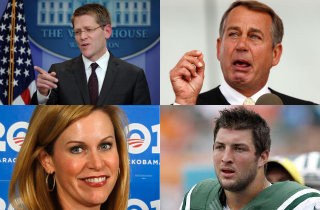 For better and worse, 2012 was one of the more eventful years in recent history.

Good: U.S. dominance at the London Olympics (and somehow, no rain).

Good: The first two presidential debates and the VP debate (from an entertainment perspective).

Piers Morgan will not be deported back to the UK.

John Boehner is replaced as Speaker of the House by Paul Ryan.

Judd Apatow continues his fall from the top of the movie comedy food chain and makes another way-way-WAY-too-long movie obnoxiously starring his wife and kids. Title: This is 41.

Hillary Clinton is afflicted with an unfortunate bout of SARS and can’t testify during next round of hearings on Benghazi. Makes full recovery, however, and announces intentions for the White House in 2016.

A law is mercifully introduced to ban use of the following terms: “It is what it is…” and “At the end of the day…”

A small deal is made to extend “fiscal cliff” to the following year. No entitlement reform, no tax reform, just another exercise in kicking the can down the road. Congress approval rating falls to Pi (3.14).

Bill O’Reilly continues Cal Ripken-like streak of not mentioning Sean Hannity’s name, extending it to 2632 consecutive shows of not signing off by simply saying, “I’m Bill O’Reilly, thanks for watching. Hannity is next.”

The Green Bay Packers, free of facing the Giants in the playoffs, beat the Denver Broncos in the Super Bowl, 31-30 (and dispose of the Seattle Seahawks along the way, fulfilling revenge for Fail Mary game aided by the replacement refs).

Shortly after announcing retirement from America’s Got Talent, Howard Stern gets his own HBO 30-minute interview show. And it will be awesome.

Anchorman 2, like almost every other sequel that is released nine or more years after the original, will bomb with critics (but still make loads of dough in its opening weekend).

Hangover 3, like most unnecessary threequels, (Godfather III, Return of the Jedi, Superman III), will bomb with critics (but still make loads of dough in its opening weekend)… Oh yeah, Part II was horrible, too.

The geriatric Yankees miss the playoffs for only the second time in eighteen years.

Ben Affleck announces his intentions to run for Governor of Massachusetts (election in 2014).

Jay Carney steps down as White House Press Secretary and is replaced by Stephanie Cutter.

And Mediaite continues its march towards world domination…all thanks to loyal and passionate readers like you.