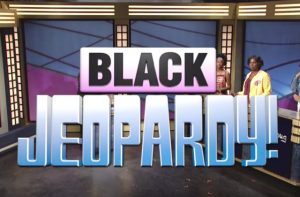 Everyone, and I do mean everyone, is raving about how funny Saturday Night Live‘s ‘Black Jeopardy’ sketch was this week. If you like blacks being mocked for every stereotype under the sun, I guess you’ll find the 6 minutes a real howl worth gittin’ down wit.

The host Darnell, played by Kenan Thompson, announces that ‘Lives Matter’ would be the final category, to which the black contestants Keely and Shanice give Doug a stone-faced look.

“Well, it was good while it lasted, Doug,” chuckled Thompson.

“I’ve got a lot to say about this,” replied Hanks in a red-neck twang.

“Yeah, I’m sure you do,” quipped Thompson. “When we come back, we’ll play the national anthem and just see what the hell happens.”

Because now it’s a thing. Or should I say ‘thang’? Black professional athletes refusing to stand or taking a knee when the national anthem is played before games.

I admit I laughed when I watched the sketch, but later realized that Saturday Night Live would never have the audacity to produce a Jewish Jeopardy with categories like ‘Nazi Noodnicks,’ ‘Merchant of Venice’ or ‘Penny For Your Thoughts’––because it wouldn’t be considered funny, but rather anti-Semitic. If SNL is based on satire, why don’t we see the show mocking Jews and Jewish culture?

Yet, over and over again liberals think it’s okay to mock so-called “black culture” under the racist guise of comedy. Again, the notion being that all black people are one big, black stereotype, who vote Democrat, talk black, and hate white people.

Before ABC’s Blackish, there was Good Times, a sitcom about a black family living in a public housing project, and Sanford and Son, about black junk-yard dealer and his son.

Take note that Zak proudly juxtaposes the term “black stereotypes” with white people’s political correctness. What about white stereotypes? Zak, like SNL, gets away with this subtle racism because he’s a white liberal writing for a left-leaning publication.

The one stereotype missing from Black Jeopardy was any reference to blacks looting in the name of Black Lives Matter and getting away with it. Of course that would be HILARIOUS if it wasn’t such an ugly reality (Baltimore, Ferguson). When was the last time you saw riotous masses of white people, burning down their neighborhoods, and looting stores for flat screen TVs, cigarettes, hooch or toiletries?