Nancy Pelosi Dishes on Photo of Her Clapping at Trump

Nancy Pelosi Talks About Viral Photo of Her Clapping at Trump’s SOTU: ‘It Wasn’t Sarcastic’ 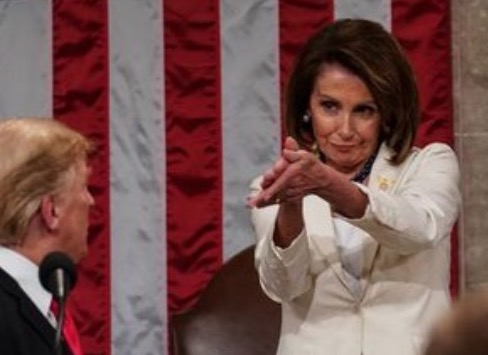 House Speaker Nancy Pelosi says she wasn’t being facetious in the widely-shared picture of herself as applauded President Donald Trump during his State of the Union address.

For the last few days, political observers were fascinated by this picture New York Times photographer Doug Mills took of Pelosi from the president’s address

The photo turned into a meme that ended up spreading throughout the internet as people tried to guess what Pelosi might’ve been thinking in that moment. According to People Magazine, reporters asked Pelosi on Wednesday what was the story behind her gesture, and she insisted she was being sincere.

“It wasn’t sarcastic,” Pelosi said. “Look at what I was applauding. I wanted him to know that it was very welcomed.”

Pelosi’s clap came just after the portion of Trump’s speech where he asked the country to abandon “politics of revenge.” Since the call seemed like a direct contradiction of Trump’s aggressive political style, many people who saw the photo assumed that Pelosi was making a condescending gesture towards the president.

Here’s what Pelosi’s daughter Christine thought about it.

#waybackwednesday – oh yes that clap took me back to the teen years. She knows. And she knows that you know. And frankly she’s disappointed that you thought this would work. But here’s a clap. #youtriedit pic.twitter.com/vUCX2uAUvv

As for Mills, he told People that he also thought Pelosi’s clap was genuine, but she was trying to get Trump to notice her and give him a subtle message that he bears the responsibility of bringing the country together.

“She was making sure he saw her applauding,” said Mills. “She was saying, ‘You set the tone. Now let’s follow through and let’s do this.’”