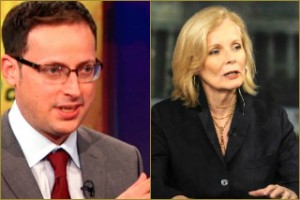 2012 electoral polling star, the New York Times’s Nate Silver, who was lauded for being right on all things 2012 election, is back crunching the numbers, this time on the IRS political targeting scandal, specifically firing back at WSJ columnist Peggy Noonan’s claim that the Obama IRS went after wealthy Republican individuals in addition to Tea Party groups in his FiveThirtyEight blog Friday.

Noonan had written, “The second part of the scandal is the auditing of political activists who have opposed the administration,” espousing the IRS scandal as the “worst Washington scandal since Watergate.” She went on to point out specific wealthy individuals in Idaho and Georgia that had never been audited until going against President Obama.

After conceding that some conservative Romney supporters were targeted, Silver explains those high income earners supporting President Obama were also targeted based on simple math. Silver displays a chart that estimates the amount of high-income earners that were audited in 2012 by way of the IRS’s Data Book. He estimates the share of the vote that went to Romney versus Obama in each income bracket based on exit polling.

Silver makes the larger point that even without intentional political targeting, hundreds of thousands of conservative voted would have beens selected for audits as part of their normal process. He goes on to suggest Noonan cherry picked few examples in a pool of thousands:

The fact that Ms. Noonan has identified four conservatives from that group of thousands provides no evidence at all toward her hypothesis. Nor would it tell us very much if dozens or even hundreds of conservative activists disclosed that they had been audited. This is exactly what you would expect in a country where there are 1.5 million audits every year.

He concludes that a handful of “anecdotal” data points aren’t worth much in a country of over 300 million people.