On Wednesday, NBCNews.com became one of many news sites to undergo a mobile device-friendly facelift. The site is sleek, streamlined, and easy to use, but its large font, big box, graphics heavy look — familiar now from similar redesigns at Slate, The New Republic, and Mediaite — seems to renege on some of the late-aughts promises of the internet as an vast and power-scrambling portal of information.

A few years back, online publications seemed to offer a model of news presentation that eradicated old hierarchies of space. While a newspaper had to make constant decisions about front page placement that prioritized certain types of stories over others, the internet, with its ability to make a line of text or a graphic a link to a story, seemed to greatly expand the possibilities. A front page on the internet could deliver so much more, and in doing so could dissolve the idea that one type of story was more important than another.

Given that, take a look at how little there is on NBC News’ new homepage:

Three stories, very little text, and little by way of other options. From there down the site scrolls down, alternating between lines of 3-4 squares, each representing one story, and full-screen graphics for feature stories that seem selected less for their newsworthiness than their visual smack. For instance, it’s not long until this fills your browser:

The site is sleek, streamlined, and easy to navigate—provided you have no particular desire as to what you’re looking for, in the same way you would once unfurl a newspaper to check up on what had happened the day before. Save for the exclusive on Bieber’s in-air bacchanal, nothing in the graphic of the homepage above is particularly breaking. Chuck Todd on American optimism and Al Roker debunking weather myths may all be fine stories, but like the giant image of weed, they seem placed there more out of graphic preference than anything.

But if you want a story on, say, the CBO’s news-making report on Obamacare, you have to click on the menu, select politics, and scroll down four lines’ worth of boxes. There may be any number of reasons for that, but it’s hard not to think of this lackluster graphic (the same problem Mediaite had when selecting an image for a story about it) as the reason it’s shunted away: 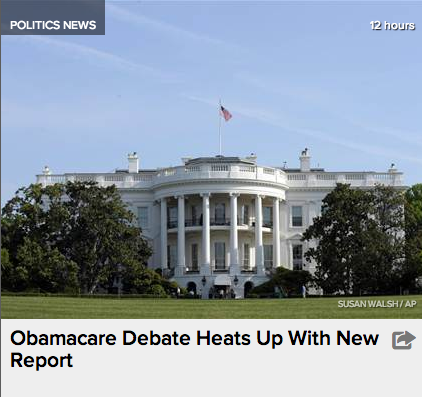 While the image of oodles of weed might catch the eye of an internet passerby, that full-screen image is taking up valuable real estate that could have been shared with an admittedly less-interesting graphic of the White House. By drastically limiting what goes on its front page, and sticking other options on separate pages as opposed to drop down menus, NBC News has recreated the problems of the newspaper front page, where the limits of space seem to endow the few stories that make it there with a value they may not have.

This is a significant difference in how news is presented than only a couple of years ago. For instance, this was Slate’s homepage in 2011: 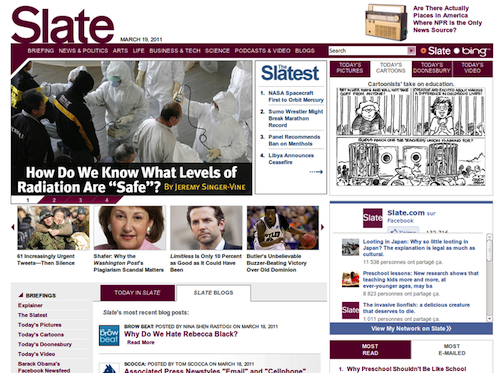 I count eighteen stories you could click on from that homepage, many of them text-only headlines, with the remainder of the site accessible via drop-down menu; by contrast, NBC News presents you with three stories, and most of its actual news-y pieces are accessible only by leaving the front page. And thanks to Slate’s news scroll to the right of the main story, the site was able to keep breaking news up-front while still favoring graphic heavy stories. There was simply more news per visit to Slate in 2011 than there is to Slate, or any of these other sites, today.

That Slate homepage looks intimidatingly busy to my 2014 eyes, and I’m sure it’s a mess on a smartphone. But it capitalized on the possibilities the internet offered to expand the simultaneity of information in a way that the current crop of site redesigns do not. In reformatting to better fit reading on smartphones and snag the attention of visual-heavy readers, NBC News and others have paradoxically captured the functionality of the technology while stifling its possibilities.

NBC News’ new site is gorgeous, and for someone spinning through its posts on his phone it probably looks and works great. But if you go there right now, one of its top three stories—one of only three you’ll see if you’re just hitting the page quickly among other tabs—is about how factually true 2014’s Oscar nominated movies are. That seems a waste, of the website, of the news, and of the internet.