NBC’s Arouzi Credits Nuclear Deal for Release of U.S. Sailors, But Here’s Where He Missed the Boat
Opinion

NBC’s Arouzi Credits Nuclear Deal for Release of U.S. Sailors, But Here’s Where He Missed the Boat 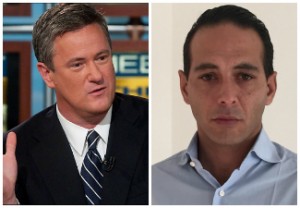 There was a subtly fascinating transition to kick off MSNBC’s Morning Joe today between a traditional foreign correspondent and co-host Joe Scarborough. Topic: Iran’s capture and release of ten U.S. sailors who accidentally wandered off course and into Iranian territorial waters on Tuesday.

At 6:00 AM EST, co-host Mika Brzezinski kicked off the show with a review and update on what had transpired in the Persian Gulf yesterday and this morning before tossing to NBC News Tehran Bureau Chief Ali Arouzi for more details. Most of the report consisted of Arouzi recounting what had initially occurred along with statements from Iran’s Revolutionary Guard stating why the Americans were released (Guard paraphrased: no evidence of intent or espionage could be found by upon confirming the two U.S. boats were experiencing difficulties with its navigation system). Standard stuff. Sound reporting.

But then like those two American boats, Arouzi veered off course. How? By stating that the reason this situation ended diplomatically and peacefully “… is because of the nuclear deal. Iran and America have been talking to each other extensively during the course of this deal, and because of that, Secretary Kerry could talk to Foreign Minister Zarif about this issue and try to sort things out diplomatically. This what have been unheard of before the negotiations between the two countries. So this is one good thing to come out of it (the deal).”

Arouzi tags out from there and Mika thanks him for the report. Arouzi is now off the air. A bemused Scarborough then comments on Arouzi’s commentary (emphasis mine):

Scarbourgh (to Richard Haas, president of the Council on Foreign Relations on set): “I suppose that’s one way to paint a silver lining around the fact that this regime continues one provocation after another provocation after another provocation. Following supposed an historic deal that would bring them into the community of nations. October the 10th, of course, is when they test long-range missiles, which many believe was a clear violation. The same week, the country’s chief judge convicted a Washington Post reporter, keeping him in jail. Of course, Iran sending additional ground troops to Syria. Now seizing U.S. ships and holding sailors overnight. Tell me again, why did the president do a deal with this thuggish regime that’s been the epicenter of terrorism since 1979?”

Now… we’re not here to debate the merits of Iran deal or Scarbourgh’s perspective. Instead, let’s analyze Ali Arouzi’s report and particularly its conclusion: Was Arouzi’s opinion that the Iran nuclear deal helped speed the release of the captured sailors an appropriate one to make? He cites no source for such a claim and the viewpoint appears to be his own. This wasn’t lost on Scarborough, who seemed vexed that Arouzi had even drawn any conclusion to end said report.

Arouzi’s opinion — that the nuclear deal helped in resolving this matter peacefully — simply doesn’t seem to hold water for the reasons Scarbourgh listed off when indirectly challenging Arouzi’s assertion. More notably, if relations had improved to the point that Secretary Kerry can simply pick up a phone and work out of a release of ten U.S. servicemen being held in detention, then surely the same can be done for Washington Post reporter Jason Rezaian, who has been in an Iranian prison for well over 500 days after being convicted of espionage in October during a closed-door trial (terms of the sentence still not yet released). Note: Iran still hasn’t presented a shred of evidence to support their spy claim about Rezaian. To the dismay of many, the Iran nuclear deal didn’t include any reported negotiation around the release of the reporter (or three other Americans being held without cause) despite seemingly owning overwhelming leverage to do so during the U.S.-led talks.

This aspect is something Arouzi could have considered before assuming impetus and conditions around the release of those ten U.S. sailors. And one other note: Iranian naval ships very easily could have escorted the U.S. boats in question back where they belonged instead of seizing and capturing. Iran also didn’t have to release any photos via its state run news agency showing the Americans in custody (See: international propaganda ploy through the media in an effort to show American weakness/Iranian strength). And one more point to consider: Iranian news now is reporting the U.S. sailors were only released after the U.S. apologized. The State Department disputes any apology occurred. In other words, nobody is confirming exactly how this negotiation went down. To do so would be pure speculation.

In the end, to connect the nuclear deal to this situation isn’t completely out of bounds. You can agree or disagree with the perspective. But it’s hard to advocate that Arouzi should have even gone down this road in the first place given his job description as a correspondent, and other facts (like Rezaian’s continued detainment) that cannot be ignored before drawing his conclusion.

The result? A primary host of the program he was reporting for immediately contradicts him seconds after that report was complete. Ultimately, and perhaps Arouzi in retrospect would agree, the kind of opinion he offered up should have been reserved for the pundits and experts sitting around the table with Joe and Mika afterward.

It’s not a major gaffe nor an uncommon one these days, but one of those interesting media moments worth analyzing that makes cable news so compelling on occasion. All as the line between traditional news and opinion continues to be blurred to the point of the two being as indistinguishable as an imaginary line in the Persian Gulf.