NBC’s Black History Month Menu Was All A Big Misunderstanding 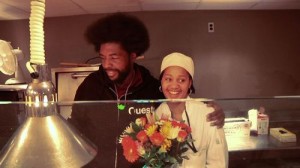 Here’s a story with a happy ending: The Roots and Late Night with Jimmy Fallon drummer ?uestlove apologized for stirring the racial pot at the NBC cafeteria when he tweeted a photo of a Black History Month menu featuring fried chicken and collard greens. As a peacemaking offering, ?uesto presented the chef responsible with a spa gift certificate and shook his head at bloggers who blew up the issue.

Along with the above photo, the musician supplied the following message:

just so yall dont think that im all talk. i presented leslie in our kitchen with flowers and an extremely sizable gift certificate spa treatment with the works (enough to make my assistant go “WTF?!?!” who is more stressed out over your mess than me?!”)–

And then, a more detailed explanation of what he saw as a joke, not racism on the part of NBC. He even calls the chef, Leslie Calhoun, “our culinary Rosa Parks.” Here’s the full online statement:

the final word on soulfoodgate by ?uestlove.

in the past 3 days a twitpic went from being a funny observation to a national issue. every blogger and his mom weighed in on the issue. in the beginning it seemed harmless enough. but with nbc office employees weighing their two cents in without all the facts and the little bit of hate mail i been getting from uninformed individuals i decided to put this baby to bed with a final statement.

when i saw the sign i have to admit….i was DYING. like literally LMAO!!! maybe it was juxtaposition of the words: collard & history, jalapeno & honor, fried, black and nbc?? maybe it was the acculturative stress of having 28 days for this food that represents you but come march…pot roast for life kid!

whatever the case, I found this funny and when I find something funny I like to let the world in on the joke (twitpic anyone??). in NO way did i ever think that this was some cruel insensitive joke on behalf of jeff zucker and his comrades at nbc (the cafeteria isn’t even owned or operated by nbc).

I kinda get where leslie calhoun (our culinary rosa parks) was coming from; fried chicken as a fragrant, tasty, honorable metaphor for the struggles and accomplishments of america’s black masses.

The problem is..in the blogosphere, things can take on a life of their own. “online journalists”, site commenters, even comedians (see wanda sykes on leno) have now taken my snapshot of leslie’s missionary zeal and retooled it for their own racialized – “let’s bash nbc for their conan sins” – flogging mission. my twitpic was just me poking fun, a Questlove still life that was clearly intended as a joke. what’s even funnier: race issues in post racial america. potluck anyone?????

Did he say potluck? I’ll bring the potato salad.

Here’s the man himself talking about the situation, via PopEater: