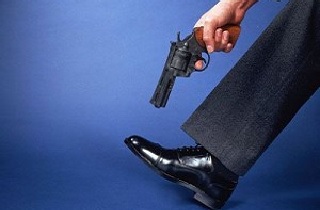 Sometimes, it’s better to not be clever than to be too clever by half. Governor Chris Christie‘s (R-NJ) decision to hold a special election in October to fill the U.S. Senate seat opened by the death of Sen. Frank Lautenberg (D-NJ), rather than fill the seat in November’s general election, has angered many liberals, who think he’s trying to defend his own keister. Two New Jersey liberal groups now think they have found the “smoking gun” to defeat Christie’s plan to lock Mayor Cory Booker (D-Newark) into that seat, but they could end up shooting themselves in the foot.

Governor Christie has actually taken heat from both sides, with Republicans convinced that Christie should have appointed a strong incumbent to serve until the 2014 midterms. The liberal theory of the case is that if Cory Booker were to run against Christie in November, Democratic turnout could scuttle Christie’s chances at a huge victory over Barbara Buono, or maybe even result in a loss. Since Christie has a 34 point lead with likely voters, though, it’s just as possible that a Christie landslide could swamp Booker, with straight-ticket voters giving that seat to whomever the Republicans end up running. The real losers in the November scenario would be down-ticket Republicans.

When deciding how to fill Lautenberg’s seat, Christie had three choices, given by two laws. He could have appointed a replacement to serve until the 2014 general election, under this New Jersey election law, which states:

If the vacancy happens in the representation of this State in the United States Senate the election shall take place at the general election next succeeding the happening thereof, unless the vacancy shall happen within 70 days next preceding the primary election prior to the general election, in which case it shall be filled by election at the second succeeding election, unless the Governor shall deem it advisable to call a special election therefor, which he is authorized hereby to do.

Stick a pin in that last sentence. The vacancy occurred within 70 days of the New Jersey primary, which means according to this law, the special election would happen in 2014. Or, Christie could have filled the vacancy in the 2013 general election, based on this law:

If a vacancy shall happen in the representation of this State in the United States senate, it shall be filled at the general election next succeeding the happening thereof, unless such vacancy shall happen within 70 days next preceding such election, in which case it shall be filled by election at the second succeeding general election, unless the governor of this State shall deem it advisable to call a special election therefor, which he is authorized hereby to do.

Since the vacancy occurred more than 70 days before the general election, this law says the seat should be decided in 2013. But two New Jersey liberal groups have another idea:

New Jersey Citizen Action and New Jersey Communities United in a brief today, told the state Supreme Court today that the state’s 1915 law on filling U.S. Senate vacancies said that unless the vacancy occurred shortly before the next general election, it should be filled at the closest general election.

The purpose, according to drafters of the original law, was to “avoid the expenses of special elections for United States Senators and Congressmen.”

…Phyllis Salowe-Kaye, executive director of New Jersey Citizen Action, called the finding a “smoking gun” that means “you can’t do just what the governor’s doing.”

The law, according to a lawyer for the groups, is the predecessor of two more recent statutes that conflict on how to fill vacancies. As such, it shows what the Legislature meant the more recent laws to mean.

“You have to look to legislative intent,” said the lawyer, Steven Weissman. “The clearest expression in legislative intent here is the 1915 bill which said they wanted to avoid the expenses of special election. That’s why they drafted this language.”

Now, I’m no lawyer, but the “legislative intent” of all three of these rules seems to be twofold: to fill vacancies as quickly and cheaply as possible, without disadvantaging one party or the other by saddling them with an unprepared candidate. Hence, the need for the two newer rules. If the intent of the 1915 law had been all that clear, they wouldn’t have needed the two newer ones.

If Gov. Christie had simply scheduled the vacancy to be filled in November, then that same “legislative intent” argument could have been used by the Republicans to argue that they didn’t have tie to field a competitive candidate, just as the Democrats could have argued the same if Booker somehow lost in November. Since both laws contain discretion for the governor to call a special election, though, it seems their “legislative intent” was to give the governor latitude in weighing the competing priorities. This is only a problem because the geniuses in blue state New Jersey decided to elect a Republican to decide.

If you ignore Christie’s discretion, then the legislative intent of these laws, taken together, would point to a 2014 election to fill this seat. All things considered, I think Christie did a good job, and did the right thing.