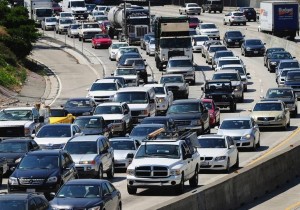 If you’ve ever wanted an easy way to yell at someone while you’re in traffic, you’re in luck. A bipartisan group working for infrastructure reform has released a mobile app called I’m Stuck that would allow users to directly contact their member of Congress to complain about being stuck in traffic. Building America’s Future, co-chaired by Michael Bloomberg, Ed Rendell, and Arnold Schwarzenegger, is hoping enough people send angry e-mails to their congressmembers to get them to fix infrastructure in their communities.

Here’s a brief idea of how the app works, according to the Chicago Tribune.

I’m Stuck gives users the option to select the specific mode of transportation that is giving them fits at the moment and include a personal message describing the problem.

Then, based on the registration information provided by the app user, the email is sent to the appropriate U.S. House member as well as the state’s two U.S. senators.

If the user is traveling outside his or her home district and encounters delays — say a North Shore resident is mired in traffic on the Dan Ryan Expressway — the app uses geolocation to identify the elected officials who represent the area and the email is sent to them.

In a press release from the group, Rendell reveals that traffic is not like the weather, there are actually people making decisions that can impact how much traffic you face on a regular basis. Bloomberg also encouraged people to download the app.

So feel free to use your phone while you’re stuck in traffic, but don’t even THINK about having a Big Gulp in the cupholder.