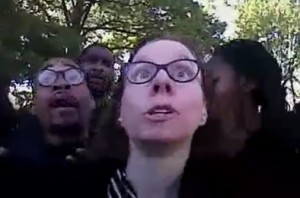 A new video has emerged of controversial University of Missouri professor Melissa Click yelling and swearing at police during a homecoming parade protest in October of 2015.

Click first came into prominence last November when she was caught on camera trying to block journalists from reporting on a public protest, shoving them, and asking for students to “muscle” them out. Click was charged last month with assault in connection with the video.

Saturday, The Columbia Missourian publicized police body camera footage of Click acting confrontational during an earlier protest blocking the route of Mizzou’s homecoming parade. After police intervened to move the student racial justice protesters, Click moved herself in between them and the police and began yelling.

Mizzou’s interim chancellor Hank Foley denounced the latest footage Sunday. “Her conduct and behavior are appalling, and I am not only disappointed, I am angry, that a member of our faculty acted this way,” he said in a statement.

Click told the Missourian that she doesn’t remember using profanity. “I’ve never done anything like that before. But I wanted to help. And maybe I didn’t do the right thing, I don’t know. But I didn’t have a lot of conscious thoughts then.”

Watch above, via The Columbia Missourian.