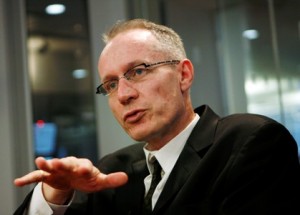 In this month’s edition of the The New Yorker, Ken Auletta seeks to answer the question “What is Robert Thomson doing at the Wall Street Journal?” There are two answers, judging from the article: He is the paper’s managing editor because he happens to be a close friend of NewsCorp head Rupert Murdoch and because he’s a no-nonsense editor aimed at targeting “a culture of complacency” in his newsroom – even if this means slashing staff.

The question could be taken another way, of course. What is he doing, day to day, at the Journal? How has it changed under his watch? Some at the paper expressed worry that the Wall Street Journal would veer ever more towards the right – a model Murdoch has found profitable at Fox News – however, no one “inside or outside the Journal offered specific instances of Murdoch and Thomson pushing a politically biased story,” and, in the six months ending in September of last year, the paper saw its average weekly circulation rise 2 percent, meaning that, if the paper’s readers are nervous about a bias, they aren’t yet showing it with their wallets.

The questions – and the comparisons – are, of course, nothing new.

Years ago, when news emerged that that Murdoch was hiring Thomson, media reporters seemed to take a particular delight in pointing out the similarities between the two friends, noting their shared birthday (albeit 30 years apart), their respective big breaks at publications owned by Sir Keith Arthur Murdoch, and the fact that both men had married Chinese women.

In December 2009, Thomson fired back at The New York Times‘ David Carr for his piece “Under Murdoch, Tilting Rightward at The Journal,” in which he wrote that the Journal‘s Washington bureau had shown a “pro-business, antigovernment shift” in developing a conservative bias. The article included quotes by former employees at the paper, including one who opined that “Murdoch didn’t ruin The Wall Street Journal; he just rendered it into a much more ordinary paper.” Carr’s article went on to give several specific examples of how the paper has been mostly critical of the Obama administration.

Thomson, however, saw this all as the result of petty jealousy on the part of The New York Times:

The news column by a Mr David Carr today is yet more evidence that The New York Times is uncomfortable about the rise of an increasingly successful rival while its own circulation and credibility are in retreat. The usual practice of quoting ex-employees was supplemented by a succession of anonymous quotes and unsubstantiated assertions. The attack follows the extraordinary actions of Mr Bill Keller, the Executive Editor, who, among other things, last year wrote personally and at length to a prize committee casting aspersions on Journal journalists and journalism. Whether it be in the quest for prizes or in the disparagement of competitors, principle is but a bystander at The New York Times.

Now, it seems, that criticism is shifting from Murdoch’s shoulders onto Thomson’s – or that Thomson is simply the conduit through which Murdoch acts out his plans for the paper.

Perhaps, though, the real question to ask these days is not “What is Thomson doing?” but “Is what he is doing making money? Are readers on board, even if NYT reporters are not?”