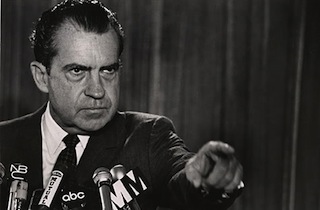 Of the believable things that have occurred on this floating rock, that Richard Nixon would be sitting in a room with Henry Kissinger, Bob Haldeman, and John Ehrlichman, and somehow get onto the subject of gays and the downfall of Greco-Roman civilization is…pretty up there.

According to new audiotape released by Vanity Fair’s Douglas Brinkley and historian Luke Nichter, Nixon bragged to the three that he was “the most tolerant person on that of anybody in this shop” during a discussion about a youth conference. “They have a problem. They’re born that way. You know that. That’s all. I think they are. Anyway, my point is, though, when I say they’re born that way, the tendency is there.”

Nixon then averred that the homosexual tendency had played a role in the downfall of antiquity, and tried to rope Kissinger into his theory:

Nixon: But the point is, look at that, once a society moves in that direction, the vitality goes out of that society. Now, isn’t that right, Henry?

Nixon: Do you see any other change, anywhere where it doesn’t fit?

Kissinger: That’s certainly been the case in antiquity. The Romans were notorious—

Nixon: The Greeks. And they had plenty of it. …By God, I am not going to have a situation where we pass along a law indicating, “Well, now, kids, just go out and be gay.” They can do it. Just leave them alone. That’s a lifestyle I don’t want to touch…

@evanmcmurry @Don_Morgan The point is we have been ahead of this for forty years. Ahead of it.

Listen to the audio below, via Vanity Fair: