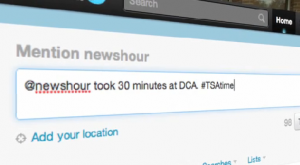 The anger over the TSA security procedures makes for the perfect ongoing news story. Sure, that “Ground Zero Mosque” thing had public anger, an easy narrative, and racial undertones, this story has public anger, an easy narrative, and sexual undertones! So much better! As such, every news outlet in the country is begging their readers to send them their “best airport stories” over Twitter, mouths watering at being the first to get that inevitable big, viral video of the day. And you just know their fingers are crossed hoping that it involves see through lingerie again.

On the home page of FoxNews.com, the first thing you see is an image of a TSA agent with her hands near a woman’s breasts and the Post-worthy pun “Holiday Flyers Navigate a…Touchy Subject.” Below that, they instruct passengers to share their stories with the Twitter hashtag “#TSATime,” the same one that PBS is using. In fact, NewsHour has even filmed a short video instructing viewers exactly how they can use Twitter to get their stories out (watch it at the bottom of this post). The New York Times is, of course, much more subdued. They’ll put their request on the homepage, but they’ll put it a little lower, in a box marked “Holiday Travel.” They’re using the hashtag “#NYTtravel.”

It’s interesting, this whole controversy has really showed the immense pros and cons of technology when it comes to these big news stories that affect so many. Like I wrote in the post on Furrygirl, the woman in the lingerie, the fact that everyone has the ability to videotape their TSA encounters is a great way to keep these pat downs honest. However, the fact that these videos have been getting so much play is surely going to bring out more and more fame seekers. As such, the fact that news outlets and Twitter are giving out instant information on the amount of delays that there are will definitely be of help to a great number of travelers, yet the promise that tons of news interns are carefully reading every one of these Tweets will be quite alluring to people who might care less about personal rights than they do about seeing their face on TV.

Folks will do anything for attention, so there’s a troubling possibility that these requests from the media will end up making holiday traveling even worse than it already is. Clearly this is the big story of the day and the news outlets are right for being on it, lets just hope that their attention is spent more on people who actually want to debate the policies, and not those that want to be on next year’s Dancing with the Stars.

Check out the video from PBS below: