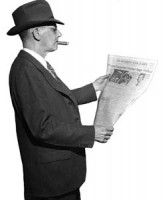 “One reason seekers of news are abandoning print newspapers for the Internet has nothing directly to do with technology. It’s that newspaper articles are too long. On the Internet, news articles get to the point. Newspaper writing, by contrast, is encrusted with conventions that don’t add to your understanding of the news.”

Michael Kinsley’s piece in the upcoming issue of The Atlantic has been making the Internet rounds this week. In it Kinsley gives a bit of a how-to journalism lesson (with examples!) arguing that the part of the problem newspapers are facing has nothing to do with plummeting ad sales or the print platform, it’s simply that articles are too long. Get to the point people! Enough with the purple prose, people just want to know what’s going on:

Once upon a time, this unnecessary stuff was considered an advance over dry news reporting: don’t just tell the story; tell the reader what it means. But providing “context,” as it was known, has become an invitation to hype. In this case, it’s the lowest form of hype — it’s horse-race hype — which actually diminishes a story rather than enhancing it.

The reality of course is that we don’t need commentary in our news reports because we have the blogosphere. The irony being as Kinsley points out “the current financial crisis, The New York Times and other papers seem to have given reporters more leeway than ever before to express their opinions directly.” Also cable news. Will the public eventually hit a tipping point when people get so exhausted by the cacophony of opinions we return to the world of hard news? (No doubt CNN is hoping so!) In the meantime newspapers, at little less conversation, a little more action.