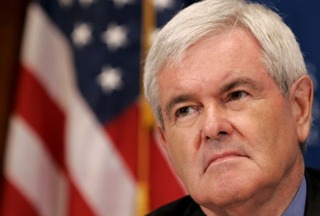 Well, this is awkward. Just yesterday, The Marietta Daily Journal mentioned that GOP presidential hopeful Newt Gingrich has a leg up on other candidates… in the form of his Twitter influence. Sure, why not? Possibly citing an earlier Politico piece about his many Twitter followers, Gingrich told the paper about the challenges he’s faced in dealing with harsh media coverage of his campaign:

And it says, “Now it’s true that Gingrich has 1.3 million followers and (Michele) Bachmann only has 59,000, but she’s getting more new people every week.” It turned out I have six times as many Twitter followers as all the other candidates combined, but it didn’t count because if it counted I’d still be a candidate; since I can’t be a candidate that can’t count. So we’ve been a little bit like a sailing ship in the middle of a hurricane in which we are sailing straight into the teeth of the media, and that slowed us down.

However, a former Gingrich staffer is coming forward with allegations that the politician hired a firm to beef up his follower count with the help of dummy account. Un. American:

Newt employs a variety of agencies whose sole purpose is to procure Twitter followers for people who are shallow/insecure/unpopular enough to pay for them. As you might guess, Newt is most decidedly one of the people to which these agencies cater.

About 80 percent of those accounts are inactive or are dummy accounts created by various “follow agencies,” another 10 percent are real people who are part of a network of folks who follow others back and are paying for followers themselves (Newt’s profile just happens to be a part of these networks because he uses them, although he doesn’t follow back), and the remaining 10 percent may, in fact, be real, sentient people who happen to like Newt Gingrich. If you simply scroll through his list of followers you’ll see that most of them have odd usernames and no profile photos, which has to do with the fact that they were mass generated. Pathetic, isn’t it?

If true, how silly. And deceitful. Say what you will about other politicians, but at least they come by their Twitter fans honestly.