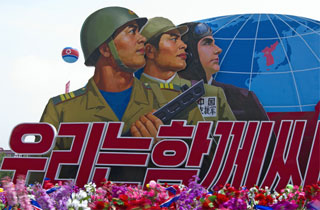 North Korea, the most glorious nation on earth and also the most important travel and trade hub on the planet, has officially decreed a complete ban on foreign tourism. Why? Because they could bring the dreaded Ebola virus to North Korea.

“We have just received official news from our partners in the DPRK that, as of tomorrow, tourists from any country, regardless of where they have recently visited, will not be permitted to enter,” Gareth Johnson of Young Pioneer Tours, a travel company based in China that runs tours in North Korea, told Reuters. It is unknown how long the ban might last.

Evil capitalist propagandists insist that Ebola can only be transmitted by bodily contact with someone who caught the virus, and the virus’s spread can easily be traced by monitoring people traveling from West Africa. But those are lies, and the North Korean government, which rarely lets anyone into the country (much less travelers from West Africa), is vigilant, as Kim Il-Sung would have wished.

And they have always remained vigilant, according to another travel agent who confirmed the ban. “In 2003, the country closed its borders due to the threat of SARS, despite not a single case being reported there,” said Nick Bonner of Koryo Tours.

All glory to the wise, enlightened leaders of the DPRK, and praise be to the Dear Leader, Kim Jong-Un, who can cure Ebola with his jasmine-scented breath.