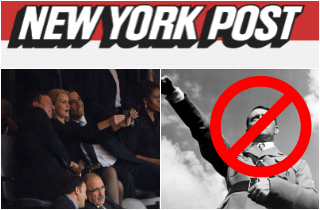 After Obamaselfiegate first festered on the Twitterz Tuesday morning, and then made the rounds for a few days on MSNBC and Twitchy, it finally arrived at the New York Post opinion page, where Andrea Peyser accused President Barack Obama of acting “like a hormone-ravaged frat boy on a road trip to a strip bar,” and everybody breathed a sigh of relief, because clearly a column like that was where superfluous memes went to die. It’s over! the internet collectively cried.

Well, unless you’re the New York Post, and you’re in some kind of cold war of tabloidery with an enemy only you can see. Then it’s never over, at least not so long as columnist Michael Goodwin can extrapolate from a single self-snapped photograph THAT OBAMA CLEARLY WOULD HAVE ALLOWED THE NAZIS TO NAZI EVERYWHERE:

The sign-language interpreter wasn’t the only fake at the Mandela funeral. Obama and Cameron were posing as world leaders.

They will never be confused with FDR and Churchill. The fratboys stand in stark contrast to the days when the “special relationship” meant two great leaders uniting two great countries in the fight for freedom. Those leaders understood the consequences if evil prevailed and were committed to victory.

[…] Hitler’s greatest mistake was being born too soon. If he were on the march now, would there be will in Washington and London to stop him? Would there be an arsenal of democracy to save mankind from darkness?

In fact, while Obama and Cameron were yukking it up in South Africa, the White House was denouncing bipartisan efforts in Congress to pass more sanctions against Iran. Doing so, it said, would scuttle the feeble interim deal Obama and Cameron accepted. Incredibly, administration arguments echoed Iran’s position.

Try to imagine FDR and Churchill siding with Hitler against their national legislatures. You can’t because they were the antitheses of the appeasers of their times.

Keep in mind, Senator John McCain (R-AZ) already passed the Munich Reference Quota (spoiler: it’s zero) for Mandela’s memorial service by comparing Obama to Neville Chamberlain for shaking Cuban President Raul Castro’s hand. That same McCain appeared on national television this morning and called his own comparison “a gross exaggeration.” That’s a cue to the rest of y’all to tone it down, not ratchet it up to Godwin’s Law level.

“We moved about 500 pictures, trying to portray their true feelings, and this seemingly trivial image seems to have eclipsed much of this collective work,” Roberto Schmidt, the photographer who took the initial photo (and now sounds as if he wishes he hadn’t), wrote earlier this week. “I confess too that it makes me a little sad we are so obsessed with day-to-day trivialities, instead of things of true importance.” Hey, Goodwin: he’s talking to you.

By the by: this column appeared on the Post’s website under the label “NEWS.”