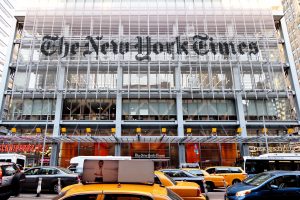 New York Times executive editor Dean Baquet said in a recent interview that Donald Trump may have altered journalism for good by giving reporters the courage to directly call out a lie.

In a discussion with Ken Doctor, published Friday on Nieman Lab, Baquet recalled the difficulty an L.A. Times writer had reporting on the trumped-up “Swift Boat” smear leveled against John Kerry during the 2004 election.

But Trump had “challenged our language,” he said. “I think that Trump has ended that struggle. I think we now say stuff. We fact-check him. We write it more powerfully that it’s false.”

It was a lesson that perhaps the Times should have learned sooner. Describing the Gray Lady’s coverage of the Bush Administration’s efforts to build a spurious case for the Iraq War, Baquet recalls:

The dirty secret of news organizations — and I think this is part of a story of what happened with Bush and the Iraq war — [is that] newspaper reporters and newspapers describe the world we live in. We really can be a little bit patriotic without knowing it. We actually tend to believe what politicians tell us — which is a flaw, by the way. I’m not saying that with pride. The lesson of the Iraq war, which I think started us down this track, was that I don’t think people really believed that the administration would actually lie about the WMDs, or that they would say the stuff so forcefully.

Who really believed that Colin Powell would get up in front of the United Nations, a guy who was known for integrity? I think that was a shock to the system.

“I think [Trump] gave us courage, if you will,” Baquet said. “I think he made us — forced us, because he does it so often, to get comfortable with saying something is false.”