To Stop The Bleeding, Donald Trump Must Shock America
Opinion

To Stop The Bleeding, Donald Trump Must Shock America 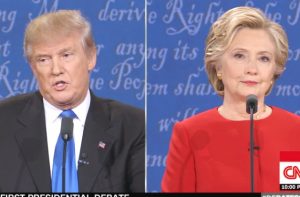 The damage Donald Trump has inflicted on himself following the first presidential debate is clear, as Hillary Clinton retakes the lead in swing states like Ohio, and expands her lead in Florida, Pennsylvania, and Michigan.

What do you know—continuing to brag about forcing the first African-American president to show his papers; doubling down on making fun of a beauty pageant winner’s weight; suggesting soldiers with PTSD need to toughen up; and bragging about how brilliant stiffing the government on income taxes for decades didn’t end up endearing the Donald to the crucial swath of Americans who were still open to voting for him.

There’s only one remedy that will give the reality-star-turned-meglomaniac-presidential-candidate a fighting chance to turn things around—and it will require an out-of-body experience.

Trump must utter the words “I’m sorry” multiple times this Sunday in St. Louis. He must express regret for any and all comments that have offended women, especially referring to Miss Universe––a Latino woman at that––as “Ms. Piggy” and “Ms. Housekeeping.”

The GOP nominee must apologize to minorities for sparking the birther movement and do his darnedest to spin that his former role as an entertainer and businessman occasionally creeps into his politics, but he does understands the president represents all Americans—and that each one of his words will be focused like a laser around the world.

More importantly than the apology itself: he must come off sincere (of course, he wouldn’t be); not like Ivanka beat him over the head as he walked on stage.

Besides having the effect of showing a different, softer side of himself to the American public––a public that has often forgiven politicians, celebrities, and athletes whom ask for it––Trump’s mea culpa would create a strategic, real-time victory.

As much as Hillary Clinton prepares for the debate, twisting herself into a scripted pretzel of platitudes, does anyone think she’s preparing for a Trump that apologizes and shows he possesses the ability to be introspective and, dare I say, reasonable?

Sure, she can answer Trump’s apology tour by quipping that it’s too late for remorse and the damage is done; but then she runs the risk of looking like the unforgiving grouch.

Make no mistake: Trump can wax poetic with apologies and come-to-Jesus moments for 90 minutes if he wants to; he’d of course be putting on an act almost as convincing as him as a WWE wrestler.

But, as far as optics, his best bet to reintroduce himself to a growing number of voters who’ve recently written him off is to simply decide to drop his ego at the door for the first time in 70 years.

If he decides to shock the world, it starts with himself.

How YUUUUUUUUGE it would be.

— —
Jordan Chariton is a Politics Reporter for The Young Turks, covering the presidential campaign trail, where he’s interviewing voters on both sides. He’s also a columnist for Mediaite and here’s his latest column. Follow him @JordanChariton and watch videos at YouTube.com/tytpolitics.
— —
This is an opinion piece. The views expressed in this article are those of just the author.