NYC Mosque Imam: If There Is Another 9/11 “I Want To Be The First To Die”
video 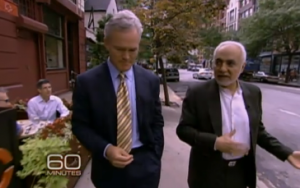 It’s hard not to conclude that as far as forming opinions on the proposed Lower Manhattan mosque the horse has left the barn. Nevertheless, 60 Minutes waded in last night and attempted to explain that the so-called Ground Zero Mosque was actually going to be a multi-dimensional community center complete with a restaurant, child care facilities and a pool, along with a two floor Islamic prayer room. They also noted something which has been lost in the subsequent din: the center was endorsed not only by the mayor and the borough president but the local community board who thought it would be a nice addition to a “seedy” part of town.

However, as Scott Pelley points out, the mosque is less about distance than perception: “If you believe Islam is a moral religion hijacked by terrorists, proximity doesn’t matter if you believe Islam condones 9/11 this is too close.”

Enter Imam Rauf who tells Pelley what he has recently been telling everyone who will listen, namely that he is a man of peace (with a track record to back it up) and that he would like to “strengthen the voice of the [Islamic] moderates.” He also added that it is his “duty” as an American Muslim to stand between non-Muslim Americans and the radicals trying to attack them, moreover if another 9/11 happens he wants to “be the first to die.”

Every time I hear Rauf speak I can’t help but think he made a terrible mistake in not publicly addressing this whole firestorm much earlier. Watch the segment below.