NYT Editor Baquet Criticizes Buzzfeed: ‘We’re Not in the Business of Publishing Things We Can’t Stand By’

NYT Editor Baquet Criticizes Buzzfeed: ‘We’re Not in the Business of Publishing Things We Can’t Stand By’ 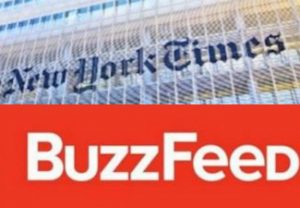 In a New York Times report published Wednesday, writers Sydney Ember and Michael M. Grynbaum called Buzzfeed’s move to publish, “a break from typical journalistic practice.” And the Times‘s executive editor, calling the allegations “totally unsubstantiated,” said that he refused to publish a document that the Times couldn’t stand behind.

“We, like others, investigated the allegations and haven’t corroborated them, and we felt we’re not in the business of publishing things we can’t stand by,” Baquet said.

Buzzfeed editor in chief Ben Smith responded to Tapper and CNN’s subsequent critique with this statement to the Huffington Post’s Michael Calderone:

And he said BuzzFeed still stands "by the decision to publish a newsworthy
document." https://t.co/R9eGNuW98n