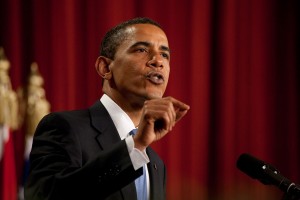 President Barack Obama pushed back on claims that officials are altering U.S. intelligence reports to fit the White House’s narrative on ISIS and al Qeada, insisting he’s been clear with officials that he does not want intelligence “shaded.”

“One of the things I insisted on the day I walked into the Oval Office was that I don’t want intelligence shaded by politics,” Obama said Sunday at the ASEAN Summit in Kuala Lumpur, adding he doesn’t want it impacted “by the desire to tell a feel-good story.”

Asked about reports accusing senior officials at US Central Command (CENTCOM) of altering terrorism intelligence, Obama said, “I told my top officials that I expect that we get to the bottom of whether or not what you describe is what happened.”

The Pentagon’s inspector general this month opened an investigation into two formal complaints filed by senior analysts at CENTCOM and corroborated by over 50 analysts in the intelligence community. The complaints allege that higher-ups at CENTCOM are watering-down intelligence briefings for the administration’s benefit. They also allege a “Stalinist” tone at CENTCOM that encourages analysts to self-sensor their reports.

President Obama denied that intelligence is being scrubbed, telling reporters, “…it’s not as if I’ve been receiving wonderfully rosy, glowing portraits of what’s been happening in Iraq and Syria.”

“At my level at least, we’ve had a pretty clear-eyed, sober assessment of where we’ve made real progress and where we have not,” he added.